We love the California spring, when local perennials complement the spring-blooming shrubs.  In fact, we wish more gardeners included herbaceous natives in their garden plans.  One of the more interesting, Fendler’s meadow-rue, is blooming right now in Mother Nature’s Garden of Health.  The scientific name for this species is pronounced thal-ICK-trum  FEND-ler-eye.


Fendler’s meadowrue is an herbaceous perennial in the family Ranunculaceae (the Buttercup family).  This family, which includes genera like Ranunculus, Delphinium, Clematis, Aquilegia, Anemone, Hellebore and Aconitum, contains mostly herbaceous perennials and annuals.  Many have lovely flowers and are well-known garden plants.  Many also produce chemicals toxic to humans and animals, some of which are used in small doses as medicinals.


The genus Thalictrum includes plants from temperate regions on every continent except Australia.  The Meadow-rues (also called Meadow rues or Meadowrues) usually grow in damp, shady places.  Species and cultivars are widely used in gardens, both for their leafy foliage and their interesting flowers.


Some taxonomists argue that T. fendleri var. polycarpum is better considered a separate species (Thalictrum polycarpum) [1, 2].   The specimen in our Garden of Health would then be that species; and some nurseries sell the plant under this name.  Whichever is correct, T. fendleri var. polycarpum tends to grow in slightly sunnier, drier locations, in Mixed Evergreen Forest and Oak Woodland communities.[3]     This variety can further be distinguished by its lack of foliage hairs and pink female flowers (those of var. fendleri are greenish white).


Fendler’s meadow-rue is an herbaceous perennial, with foliage mostly growing in a mounded clump 1-2 feet (30-60 cm) tall and 1-3 feet wide.  The flowering stalks are taller – 4 or 5 feet (1 meter or more) and have sparse foliage. The entire plant dies back (to the ground) in the dry days of late summer and fall, emerging again with the winter rains. 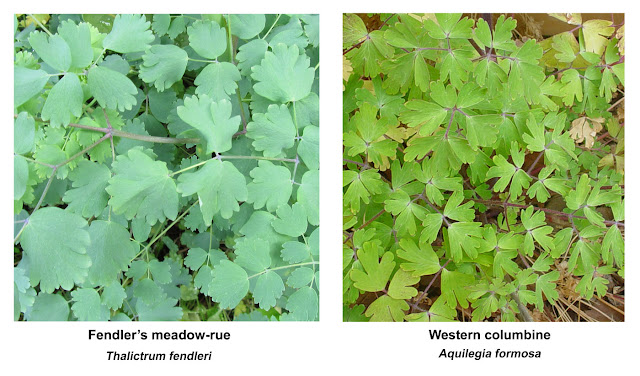 Meadow-rue’s foliage is one of its strong points, at least from a gardener’s perspective.   The foliage is quite similar to that of its close cousin, the Western columbine (Aquilegia Formosa; see above).  The leaves are medium-green to blue-green and have long, slender petioles (leaf stems).  The leaves are several-times compound, with rounded, irregularly dissected, terminal leaflets (see below).  The foliage is reminiscent of Maidenhair fern (but larger) or a delicate rendering of the Columbine.

The young foliage is utterly enchanting to observe.  The young leaves, which are a bright yellow-green, emerge in spring fully formed but compacted.  As the petioles lengthen, the leaves unfurl to their final size.  The petioles often have a red-purple tinge, adding to the foliage spectacle.  Preformed leaves are found in some plants growing in cold climates. This trait protects delicate leaves but allows plants to leaf out quickly, once the weather warms up.   We wonder whether pre-formed leaves developed as a similar adaptation in our mountain-growing Meadow-rues.


Fendler’s meadow-rue is usually dioecious, with male and female flowers on separate plants.  Plants with some bisexual flowers sometimes also occur in this species. The flowers of both sexes grow on tall (3-6 feet; 1-2 meters), slender flowering stalks above the foliage. The only way to tell the plants apart is when they’re flowering.


Male flowers are the showier (above).  Neither male nor female flowers have petals (they do have small, green-white sepals).  But the male flowers have cascading yellow or purple stamens with prominent anthers (producing the yellow pollen).   The resulting flower cluster is unique and attractive.  When most gardeners describe Thalictrum fendleri’s unusual flowers, they are thinking of the male flowers.


Female flowers (above) also grow in clusters of 10-20 along a flowering stalk.  The female flowers are simple affairs, with a single, immature (green) fruit beneath the styles (female sex organs). Each fruit contains a single seed – an unusual situation in the plant world.  In T. fendleri var. polycarpum, the styles are medium to bright pink; in var. fendleri, they are green-white.


Given the dangling anthers and simple flowers, it’s not surprising to learn that Thalictrum fendleri is a wind pollinated species [4].  The Meadow-rues are an interesting genus, with some members being insect pollinated and others wind-pollinated.


Why might separate male and female flowers – and wind pollination – have developed from the more common bisexual, animal pollinated condition of the Angiosperms (flowering plants)?  Those are questions that plant biologists are just beginning to seriously tackle.  And it’s genera like Thalictrum that can shed light on the genetic and environmental factors associated with the development of sexual differentiation and wind pollination.  For more on this exciting story see references 5-7, below.


Being a woodland species, Fendler’s meadow-rue prefers part-shade to quite shady conditions.  It does well with morning sun or in the dappled shade under trees.  It’s not particular about soil texture; we’ve grown it in very sandy as well as clay soils.  It has a wide range of acceptable soil pH (5.0-8.0) and is fine with organic mulches.  As a woodland/riparian woodland species, it can also be grown in soils with higher organic content than many of our local natives prefer.


Fendler’s meadow-rue is actually quite drought tolerant, but will remain green well into summer with occasional to near-regular water.  Dress with a modest amount of organic mulch and plants will remain happy and disease-free.  The only problem we’ve had in our Garden of Health is wind damage to the delicate flowering stalks.  If you live in a windy area, you might want to consider a protected part of the garden.


Introduced into the horticultural trade by Theodore Payne [8], Fendler’s meadow-rue adds woodland charm to any shady garden.  It works well with the native ferns and other shade-adapted perennials like Western columbine, Solanum xanti, Douglas’ iris, wild strawberries and the Heucheras.  It’s often used under oaks, Blue elderberry and other trees. Other gardeners use it in moist places like rain gardens or shady swales. 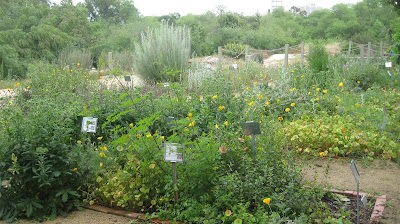 This species makes a number of interesting chemicals, some of which are toxic to humans and animals.  No part of the plant should be ingested.  Native Californians made an infusion of the leaves that was wiped on the forehead for headaches.  A poultice of the foliage was applied for sprains.  In all areas where this plant grows, people were aware of its toxicity, and used it only sparingly – and always externally.

In summary, Thalictrum fendleri is an interesting plant in an interesting genus.  While it produces toxic chemicals, so do many plants routinely included in gardens, including Delphiniums, Angel’s trumpet, Azaleas, Coral trees, Autumn crocus, Flowering tobacco and Hydrangea. Used with respect, this plant adds seasonal charm to local gardens.  If you’ve got a shady spot, it might be just the plant you need.


For more pictures of this plant see: http://www.slideshare.net/cvadheim/thalictrum-fendleri-web-show

We welcome your comments (below).  You can also send your questions to: mothernaturesbackyard10@gmail.com
Posted by Mother Natures Backyard at 11:29 AM