Habitat gardening is becoming popular in the United States and elsewhere.  There’s something satisfying about planting a garden that attracts a wide range of birds and other creatures.  Many gardeners dream of a garden filled with butterflies and birds.  But how realistic is that dream?  And how long will it take for a new garden to meet those expectations?


One thing gardening teaches us is patience.  The best garden features – shade trees, large flowering shrubs, nesting birds – take time.  But you’ll probably see some changes right away, when you begin to garden for habitat.  For example, a water source and fast-growing flowering plants begin attracting insects and birds the first year.


We encourage your comments below.   If you have questions about habitat gardening or other gardening topics you can e-mail us at :  mothernaturesbackyard10@gmail.com
Posted by Mother Natures Backyard at 7:59 AM 1 comment:


By August, the only perennials blooming in Mother Nature’s Backyard (other than the buckwheats) are those in moist, shady places.  One pretty little perennial, blooming for the first time this year, is the Dunn’s lobelia.   The scientific name is pronounced low-BEE-lee-uh  DUN-ee-eye  sir-RAY-tuh.


Dunn’s lobelia (sometimes also called Blue lobelia and Rothrock’s lobelia) is a California member of the Campanulaceae, the Bellflower family.  This family has 80+ genera and about 2400 species worldwide, mostly in the Northern Hemisphere [1].  Included are garden favorites like the Campanulas and the Lobelias.  As suggested by the common name, the flowers of the Campanulaceae are bell-shaped and often blue or violet colored.


The genus Lobelia is well-known to gardeners. Ornamental cultivars spread their old-fashioned charm under trees and along shady pathways. They take a little extra water, and so are useful for naturally moist areas.  While some are annuals (or treated that way), perennial species have the added advantage of coming back, year after year, in a welcome splash of green and blue.  No wonder gardeners like the Lobelias.


Only two Lobelia species are California natives.  Both Lobelia cardinalis and Lobelia dunnii are native to the mountains of Central (Santa Barbara and Ventura Counties) and Southern California. They also grow along the Monterrey County coast.  Where ever they are found, they favor shady, moist areas: canyons, seeps, rocky stream banks, the edges of waterfalls – you get the picture. 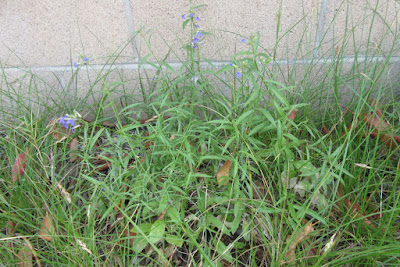 There is current debate about the proper taxonomic status of Lobelia dunnii.  Some have proposed reverting to an older taxon, Palmerella debilis, first proposed by the eminent 19th century taxonomist Asa Gray [2]. The California Lobelias do have a distinctive appearance, and may well deserve a genus of their own.  But since most native plant and garden folks know Dunn’s lobelia as Lobelia dunii, we’ll stick with that name for now.


Lobelia dunnii var. serrata, the variety we’ve got in the garden, can still be found in the canyons of the San Gabriel and San Bernardino Ranges, as well as on Santa Catalina Island and in northern Baja California, Mexico.  It was first collected in the 1800’s and grows in moist places in Coastal Sage Scrub and Chaparral below about 4500 ft. (1400 m.).    If you hike the moist canyons below San Antonio (Mt. Baldy) and Ontario Peaks in the San Gabriels, you may have seen it along the streams.

Like most local perennials, Dunn’s lobelia dies back to the ground in fall, to emerge again with the winter-spring rains. If you continue to water it, the plant will remain green into early fall – then let it dry out and rest.   Most S. California perennials really do need a period of rest in the fall.


If you don’t know what you’re looking for, you may miss the emerging stems (see above).  The emerging leaves look quite different from the leaves of the mature, summer plant.  If a plant is happy, it will send up more sprouts each year, and spreading to a 2-3 ft. patch.   Plants also re-seed in local gardens.


Dunn’s lobelia is an herbaceous perennial, growing at most 12-18 inches (30-45 cm.) tall.   It is sometimes erect, but as likely to be somewhat sprawling (decumbent) of habit.  The leaves are a fresh spring green, elongated and becoming slightly smaller up the stems. The foliage is quite open; not shrubby, but rather a delicate, lacy groundcover, somewhat mint-like in appearance.


The flowers are cottage garden pretty – small and pale lavender or blue. The flowers may be up to 1 inch (2.5 cm) long.  They are clustered at the tops of the stalks. As flowers open over time, the total bloom season may be a month or more.


The petals are fused into a long tube, with 5 lips.  The lower three lips are elongated and extend down.  The upper two lobes are curled tightly back – a unique appearance (see below).  The flowers are loved by long-tongued butterflies; this plant is often planted specifically to attract them.


Dunn’s lobelia will grow in most local soils (except salty or alkali), though it prefers a rich loam.  It does fine in our local clays.  We’ve been most successful growing this plant on the north side of a tall wall.  It would also do well in dappled sun under trees.  We’d only try it in fall sun at the edges of a pond.


This is a species that likes moist soils - it can even take winter flooding.  Regular water through the bloom season is probably best.  We give ours (in clay) a deep soaking every 3 weeks in summer, then taper off in early September.    That’s really about it.


Lobelia dunnii is a perennial to tuck into shady, moist places.  It does well with native grasses, sedges, juncus, Solanum, Nicotiana and others that like a little extra water.  We’d love to try it in a moist pot on a shady porch. It’s not a garden diva.  But it’s charming as a violet is – simple, sweet and unassuming.  And then there are the butterflies!


In summary, Dunn’s lobelia is a wonderful little perennial.  If you have a moist shady spot – or can create one – this might be a butterfly plant to try. 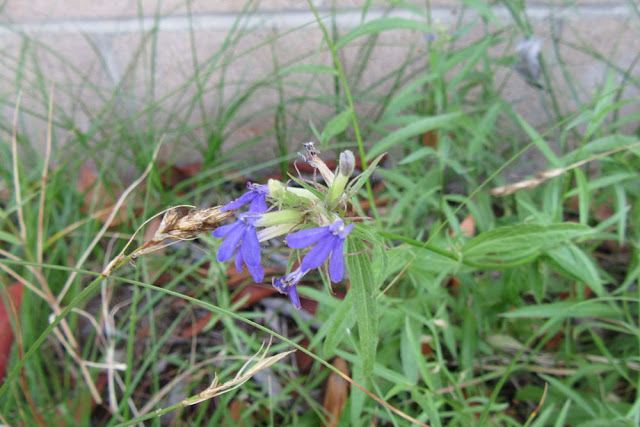 
For more pictures of this plant see: https://www.slideshare.net/cvadheim/lobelia-dunnii-web-show

Posted by Mother Natures Backyard at 7:05 AM No comments: