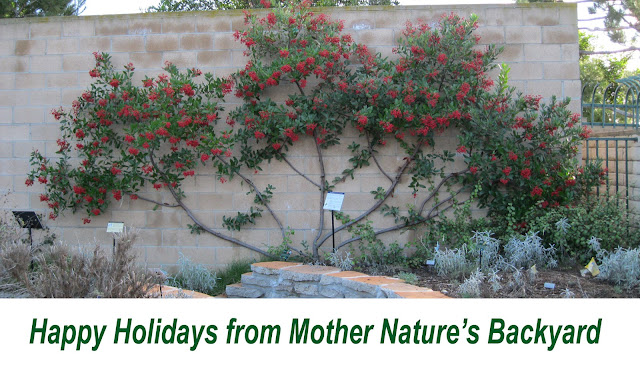 Posted by Mother Natures Backyard at 7:21 AM No comments:


Seeds are germinating, bulbs are emerging, but very few flowers can be found in early December.   So we were pleasantly surprised to see our Sourberry (Rhus trilobata/Rhus aromatica) coming into bloom, just in time to be our Plant of the Month.   The scientific name is pronounced roos  try-lo-BAY-tuh (roos  air-oh-MAT-ih-cuh).


Sourberry is known by a number of common names including Three-lobe sumac, Three-leaved sumac, Basket bush sumac, Oak-leaf sumac, Skunk bush and Lemita. It belongs to the same genus as our common Lemonadeberry (Rhus integrifolia) and Sugar bush (Rhus ovata).  It’s a ‘cousin’ to the local Laurel sumac (Malosma laurina) and Poison oak (Toxicodendron diversilobum).  All are members of the Sumac family (for more on the Anacardiaceae see: http://mother-natures-backyard.blogspot.com/2014/12/plant-of-month-december-lemonadeberry.html.
Like many other plants, the taxonomy of this species is currently being revised.  Previously, Rhus trilobata was considered a western N. American species; Rhus aromatica was viewed as a related eastern species.  It now appears that both may be the same species (Rhus aromatica), though much of the western literature – and the nursery trade – still refers to R. trilobata.  For clarity we’ll use both names, but focus on the natural history of this plant in the West (which is most relevant to California gardeners).


Rhus trilobata (aromatica) is native to western North America, from Alberta and Saskatchewan south to Texas and California – even into Mexico.  It grows in prairies and shrub lands, on a variety of sites including sandhills, seasonal stream beds, canyons and dry, rocky slopes.  In S. California, it can be found in the canyons and washes of interior valleys, in coastal sage scrub, chaparral and southern oak woodland, mostly below 3500 ft. elevation.   It grows in the Santa Monica Mountains and in the foothills of the San Gabriel Range.


Sourberry is a winter-deciduous shrub that varies in growth habit across its Western range.  In some situations it’s a low (2-3 ft. tall) mounding groundcover (above).  In other places, it grows as a rounded, upright shrub which may reach heights of 6-8 ft. and similar spread (see photo below).  In moist conditions, plants spread by rhizomes, sometimes forming a thicket.  In drier S. California, plants will often remain as solitary shrubs for many years.   Plants have a lifespan of perhaps 30-40 years; they grow most rapidly during their first five years.


The foliage of Rhus trilobata (aromatica) is medium-green to blue-green most of the year, turning yellow to orange in fall - if temperatures are cold enough.  In the western L.A. Basin, fall leaf color is variable from year to year. Plants lose their leaves in fall (usually November in our area) and leaf out again in spring (often as early as February in milder climates).  The plants leaf out quickly, from pre-formed leaf buds.   Plants often don’t leaf out until after flowering.


Sourberry leaves are three-lobed, glossy, leathery, 1 to 1 ½ inches across.  They look somewhat like those of Western poison oak (Toxicodendron diversilobum), though not as shiny and a smaller size. For good pictures comparing the two species see reference 1 (below).


The young bark of Rhus trilobata (aromatica) is often a medium red-brown, but may be as light as a pale gray-brown, with pale hairs.  Older bark is gray-brown, mostly smooth and fissuring with age.  When branches are broken (or leaves are crushed), they release an aroma that is skunky-smelling to some (hence the common names ‘Skunk brush’ and ‘Stink-bush’).


The roots of Rhus trilobata (aromatica) are well-adapted for climates of the  American Southwest, including California.  Plants have both a deep taproot and a network of fibrous, shallower roots.  This combination allows them to make optimal use of intermittent rains, as well as tap into deep groundwater reserves during dry periods. Because of the deep taproot, plants resent being moved once established in the ground.


Sourberry blooms in early spring (February-April) in much of S. California, though flowers may appear in winter at lower elevations.  Plants may be dioecious (separate male and female plants).  More commonly, plants contain both unisexual and bisexual flowers on the same plant.   Male and female flowers are both small (~ ¼ inch across), with yellow petals. Male flowers cluster along yellow catkins (like a willow) and are slightly paler in color, while female flowers occur in dense, brighter clusters at the ends of short branches. Flowers are primarily bee-pollinated.  We’ll try to update our close-up pictures of flowers – hopefully with pollinators - soon.
Those familiar with the fruits of Lemonadeberry and Sugar bush will immediately recognize similarities between the three species.  The fruits are small (about ¼ inch; 5-7 mm), sticky drupes that contain a single seed with a hard seed coat (a nutlet).  Fruits are initially green, becoming a dark red when ripe (see above).  Fruits ripen in late spring/early summer (June/July) at lower elevations in S. California; they may ripen as late as early fall in colder climates.  The fruits are loved by birds and animals – including humans!


Like Lemonadeberry, the fruits are covered with a sticky, sweet-sour secretion that tastes like lemon or lime.  In fact, the most common edible use for the fruits is to make ‘Rhus-ade’, a lemonade-like drink. Some Native Americans still grind dried Sourberry fruits and use them as flavoring for puddings, mush or bread.  In fact, the fruits can be used as a flavoring or seasoning in more ways than you might think.  For additional ideas for using the fruits see: http://mother-natures-backyard.blogspot.com/2015/05/california-gourmet-cooking-with.html


Sourberry is an undemanding plant.  It tolerates pH from 6.0 to at least 8.0, and grows fine in soils ranging from very sandy to clay.  If your soils drain very slowly, consider planting Rhus trilobata (aromatica) on a slope or atop a small berm (it’s intolerant of standing water).  While it can be found growing in full sun, it seems to do better in our area in part-shade.  If you have a hot, inland garden, plant it where it gets some afternoon shade.


Rhus trilobata (aromatica) is very drought tolerant.  However, it looks (and produces) best with occasional summer water.  Let the soils dry out between watering, then give the shrub a deep, slow soaking.  In many areas of the West, this plant experiences occasional summer rains.

While Rhus trilobata (aromatica) develops a nice natural shape over time, the best-shaped shrubs are given a yearly pruning to stimulate fullness.  Branches should be pruned back by ¼ to 1/3 of their length in fall (after leaves fall) or early winter.  This pruning simulates the animal browsing that shrubs experience in the wild.  Some individuals are mildly sensitive to chemicals produced by the foliage of plants in this genus.   We suggest wearing long sleeves and gloves when pruning (at least until you know you’re not affected).  Wash hands/arms after handling the foliage.


If you desire straight stems for basket-making or other crafts, you’ll need to cut some or all of the stems back to the ground in early winter (coppice).   While native traditions involve cutting or burning an entire stand every few years, we wonder if just cutting back 1/3 of the oldest stems might not work as well.  We’ll try this and report back.


Sourberry is often used as a large shrub, either shaped or natural, in garden plantings. It contributes to the woodsy, natural look that some gardeners prize.  It can also be used as a hedge plant, remembering that it is winter-deciduous.  It does well on slopes, often getting by with little supplemental summer water once established. It is widely used for erosion control on slopes and in riparian areas. And Rhus trilobata (aromatica) is becoming more common in commercial plantings, due to its drought tolerance and low maintenance.


Sourberry can be grown in a large container – even used as a bonsai plant.  The lower-growing forms are useful as a woody groundcover under trees.  The cultivars ‘Autumn Amber’ and ‘Gro-low’, which are available commercially, grows less than 2 ft. tall, and are popular as groundcovers.

Of the many shrubs planted in S. California gardens, Rhus trilobata (aromatica) has some distinct advantages.  First, it is a great habitat plant.  Its size, many small flowers, dense foliage and edible fruits make this a good choice for bird and insect habitat.  If you don’t use the fruits yourself, don’t worry; plenty of fruit-eating birds will be glad to remedy the situation.


If you are a basket-maker, planting Rhus trilobata (aromatica) insures a ready source of the straight stems needed for your craft. [2]  This has always been an important basketry plant, wherever it grows.  If you need it for your craft, grow it.


Sourberry, along with the other local Rhus species, is also a useful plant for the natural dyer.  Leaves, prunings, ashes and fruits can all be used to mordant yarn or fabric prior to dyeing.  The plants are high in tannins, and tan-brown dyes can be obtained from leaves, bark and roots; pink-tan dyes are possible from the fruits.
Another good reason to grow this plant is its medicinal properties.  As always, medicinal plants should be used with caution – particularly those from families with known toxicities, like the Sumacs. For more on precautions see: http://mother-natures-backyard.blogspot.com/2015/10/garden-of-health-making-tincture-for.html


Fruits of Rhus trilobata (aromatica) were traditionally sucked or chewed as a treatment for toothache, mouth sores or as a mouthwash.  Fruits ease the pain, in part due to their astringent chemicals.  A decoction of the fruits is also traditionally used for stomach problems, as well as a hair tonic.


The leaves are astringent, diuretic, emetic and hemostatic; infusions made from leaves have several traditional uses, including to treat head colds and soothe skin itches. Dried, powdered leaves have been used to create soothing salves for mouth sores.  For more traditional uses of this plant see reference 3, below.


In summary, Rhus trilobata (aromatica) is a shrub with much to recommend it.  We’re surprised is isn’t used more often in the garden setting.  So if you’ve got the space – even room for a large pot – you might want to consider this pretty and useful native.


For more pictures of this plant see: http://www.slideshare.net/cvadheim/rhus-trilobata-web-show

We welcome your comments (below).  You can also send your questions to: mothernaturesbackyard10@gmail.com
Posted by Mother Natures Backyard at 10:30 AM 1 comment: