Gardeners are learning to appreciate the diversity of native pollinators, in part due to the activities of National Pollinator Week (the 3rd week in June).  To learn more about pollinators in general, see our June 2013 posting (http://mother-natures-backyard.blogspot.com/2013/06/life-friendly-gardening-planning-for.html).


Among the warm weather pollinators are the wasps.  While many gardeners associate wasps with nasty stings, many are mild mannered and rarely sting humans.  Most are true garden heroes, functioning not only as pollinators but as predators of unwanted garden creatures. They should be welcomed, not feared, by local gardeners.

Most Thread-waisted wasps nest in the ground, usually in areas that have sparse or no vegetation.  Most are solitary nesters. Adults feed on floral nectar, honeydew, and body fluids of their prey. Their larvae feed on the paralyzed bodies of a variety of arthropods including spiders, grasshoppers, and caterpillars. Adults provision the nests prior to laying eggs.


The taxonomy of the Family Sphecidae has been recently revised [1].   It currently contains about 130 genera and over 700 species worldwide.   The Family is divided into Sub-families and Tribes, based on similarities in morphology (appearance) and DNA [1].  The Tribe Sphecini (in the Sub-family Sphecinae) includes two genera (Isodontia; Sphex). The Sphecini are large, strong flyers, active during the warm/hot part of the year.  Several species of Isodontia and Sphex are known to visit S. California gardens, particularly those with native plants. So, you likely have seen them in local gardens.


Native to the Western Hemisphere (from southern Canada to Central/South America and the Caribbeans), the Great Golden Digger Wasp is impressive, indeed [2].  Usually between one-half inch and one inch (1.25 to 2.5 cm.) in length (sometimes even larger), they are distinguished by the golden pubescence (hairs) on their black head and thorax, their reddish orange legs, and partly reddish orange bodies.  Half of the back segment of their abdomen is also black; the front segment and legs are a conspicuous reddish-orange.  The scientific name is pronounced ‘SFEX  ick-new-MOW-nee-us’.


Great Goldens are not uncommon in parks, gardens, wild lands and vacant lots; in short, where ever there are flowering plants, grasshoppers/katydids and bare, sandy ground for nest sites.  They can be seen in warm weather, usually from May to September in S. California.  We’ve seen them primarily in June and July in our area – they are particularly busy in the dry, sunny days of early summer.


While large, these wasps are not aggressive unless handled, swatted, or otherwise threatened.  Approach them slowly and respectfully; watch and photograph, but don’t touch.  They are wary creatures, but tend to go about their business if left alone. They are very active; you’ll probably have to photograph them with a telephoto lens.  For more tips on photographing garden insects see: http://mother-natures-backyard.blogspot.com/2015/07/life-friendly-gardening-photographing.html


Great Goldens are so large and colorful that they are easy to spot. They twitch their wings, making them appear to flash rapidly - a behavior that attracts your attention.  The adults feed on flower nectar and sap.  They utilize a wide variety of flowers.   We see them mostly on plants with many small flowers, particularly the summer-flowering native buckwheats, yarrow and milkweeds.


Great Goldens (and other Sphex) are solitary insects: they do not share the responsibilities of provisioning for and raising their young. However, dozens or even hundreds of females have been seen nesting in the same area.  Some favored sites are used year after year [2].  Adult females hunt/collect crickets, grasshoppers and katydids to serve as food for their larvae. Sphex ichneumoneus wasps track their prey, hence the name ‘ichneumoneus’, Greek for tracker.


The nesting behavior of Sphex ichneumoneus is well documented, in large part due to the careful studies of several entomologists.  For a detailed description see reference 3, below.  In late spring or summer, each female constructs from 1 to 10 nests.  The nests are dug in bare sandy soil; in local gardens they are often in pathways or other areas covered by decomposed granite (DG).


The main tunnel is one-half inch (1.25 cm) in diameter and four to six inches (10-15 cm) deep.  From one to seven brood cells radiate off the end of the main tunnel.  These are where eggs are laid and larval provisions are stored.  The entrance to the nest is covered up (to hide it) each time the female leaves.


Great Goldens hunt for crickets (Gryllidae), grasshoppers (Trimerotropis) and katydids (Tettigoniidae) to serve as food for their young.  The prey are paralyzed with toxins in her sting.  Smaller prey are then picked up and flown to the nest.  Larger prey are dragged along the ground by their antennas, which the Great Golden grasps with her mouth [3].


All parts of the nesting behavior are ritualized; they are repeated again and again with very little variation.  Upon reaching the nest with her prey, the Great Golden first inspects the burrow before dragging the prey inside.  The prey – an average of four per brood cell – remain alive but paralyzed until eaten by the larvae.  One egg is deposited per prey and the eggs hatch several days after being laid.


Great Goldens have but a single generation per year.  The larvae spend the winter in the underground nests.  They emerge as adults the following spring, and the cycle goes on.

For more pictures of the Great Golden Digger Wasp see:


The Burrowing Wasp, AKA the Orange Katydid Wasp, is another Sphex species we see this time of year. It is sometimes also known as Fernaldina lucae.  The scientific name is pronounced ‘SFEX  LOO-cheh’ (or LEEOO-chuh).  The species was named by Henri Louis Frédéric de Saussure (1829-1905), a Swiss mineralogist and entomologist, and a prolific taxonomist [4].  He was particularly interested in the solitary wasps.


The Burrowing Wasp exhibits sexual dimorphism; the male and female of the species look different. The male is smaller (3/4 to 1 inch; 2.2-2.5 cm) in length, slender and all black with violet reflections on the wings.   The females are slightly larger (to 30 mm; 1.2 inches) and more robust than the males.  They are also more colorful: black with a red abdomen, and yellowish or violaceous wings [6].   Unfortunately, we have mostly photos of the females at present – we’ll try to remedy that soon.  Note that face, legs and thorax are completely black in this species.


The nesting behavior of Sphex lucae is similar to that of Sphex ichneumoneus.  The prey are primarily Katydids.   Adults nectar on small flowers – native buckwheats and yarrow in our garden, but also acacias, Melilotus and likely other species.


Males are known to spend the night in clusters or ‘sleeping groups’ [6, 7].  The location may change from night to night, but groups tend to remain together, sleeping in sheltered places (in flowers; under leaves; under rock ledges). 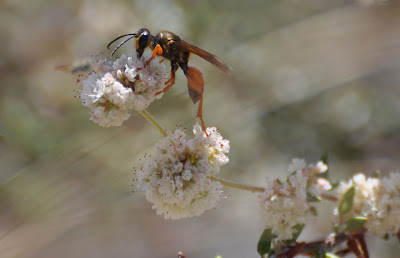 In summary, the Sphex wasps are interesting and colorful additions to the garden.  They are mild-mannered, and their behavior is fascinating to watch.  So enjoy them in the wild and in your garden – and, please, don’t get out the can of Raid and kill them.  They are garden heroes, important to the garden ecosystem and important parts of our natural heritage.

We encourage your comments below.   If you have questions about insects or other gardening topics you can e-mail us at :  mothernaturesbackyard10@gmail.com
Posted by Mother Natures Backyard at 12:21 PM