Several local plants are putting on quite a show this year, despite spotty rains and plenty of wind. One that’s looking spectacular is our Plant of the Month, Fragrant pitchersage.  If you want to see the pretty flowers, now’s the time to visit Mother Nature’s Backyard.  If you can’t make it this month, other attributes of this lovely  sub-shrub can be enjoyed year-round.


The genus Lepechinia, the Pitchersage genus, is an attractive member of the Mint family (Lamiaceae). Most of the approximately 45 species have the unusual pitcher-shaped flowers that give the genus its common name.  Lepechinia are native to South and Central America (to central Argentina) north to the coastal Northern California foothills.


There are five species native to California, with Lepechinia fragrans being the most abundant in Los Angeles County.  Like most Lepechnias, it grows in the foothills and lower mountain flanks – in this case of the local Santa Monica and San Gabriel Mountains.  It can also be found on both the Northern and Southern Channel Islands.   The plants are usually scattered among other chaparral species, most often on north-facing slopes and in canyons that provide a little summer shade. 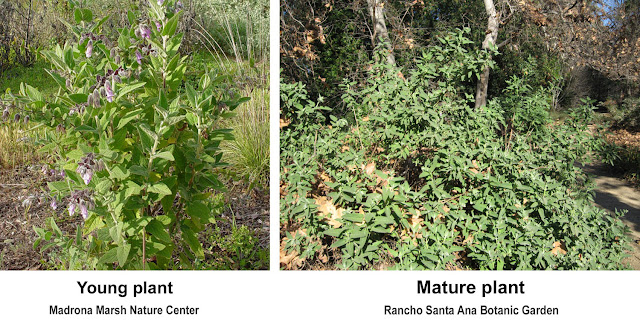 Fragrant pitchersage is a perennial sub-shrub that can grow to 6+ feet wide, but is usually 3-6 ft. (1-2 m.) tall and wide.   Plants are vase-shaped in youth, becoming regular, upright and mounded within several years; they become increasingly irregular and sprawling with age (see photo, above).  Plants tend to remain more compact in sunnier positions - and if they are pruned.  The lower portions of the branches are woody and brittle, while the new foliage is succulent and herbaceous.


The plant grows new side branches each year in late winter, sprouting somewhat irregularly from the mature wood. The new branches give the plant a fresh, youthful appearance each spring.   The wood itself is rather brittle – it can even be broken in a wind storm.  Older branches also seem prone to unexpected winter die-off, at least in our hands.


The new spring foliage is pale green and densely covered with velvety hairs.   The leaves are simple, lance-shaped, with a stout petiole (leaf stalk) on the lower leaves.  The leaves often have shallowly dentate margins (like small pointed teeth). The lower leaves are bigger (to nearly 5 inches; 10-12 cm.) than the upper ones.  Leaf color is fresh green to gray-green in early spring, somewhat darker in sunnier conditions (see photo above).


Like many local native shrubs, Lepechinia fragrans produces two sets of leaves a year: a larger, more succulent set in winter/spring and a smaller, drier and darker set in late spring.  Some/many of the spring leaves are shed during the dry season.  Don’t be alarmed when this happens – it’s a perfectly normal adaptation to our dry climate (for more see: http://mother-natures-backyard.blogspot.com/2015/10/how-things-work-plant-drought-tolerance.html).


As seen in the photo above, the new foliage (and even the flowers) is sticky with glandular hairs (trichomes).  These produce the chemicals that combine to produce a distinctive fragrance.  This species is aptly described as ‘fragrant’; brush by it or rub a leaf in your hands to release a fresh, minty, but entirely unique scent.  We grow this plant in part for its aroma, which we add to potpourri, tea and other dishes.


As far as we know, the chemical composition of Fragrant pitchersage has yet to be studied.  But other Lepechinias make a complex mix of aromatic chemicals – many with medicinal properties.  The closely related Lepechinia calycina produces anti-oxidant and anti-bacterial compounds and is used medicinally to treat colds and uterine infections, and as a poultice for skin problems.   It was also combined with olive oil and Creosote bush (Larrea tridentata) to make an early sunscreen. Mexican and Peruvian Lepechinia are well-known medicinal plants, whose chemicals are currently being evaluated for medical potential. We suspect that Lepechinia fragrans also has medicinal properties.


Fragrant pitchersage has exquisite flowers.  A pale lavender color, they hang down from long, slender flowering stalks.  There are often 10-15 flowers per ‘wand’ in our gardens.   The calyx (formed of fused sepals) also has a purplish tinge.  In the ‘El Tigre’ cultivar (see above), the calices are a dark red-purple and very showy indeed.  The flower color is also a little darker in this cultivar (at least when we’ve seen it).

The close-up picture, above, shows the unique shape of the flowers.  The petals are fused into a funnel-shaped throat with three upper lobes and two fused lower lobes that form the ‘lip’ or ‘pouring spout’ of the pitcher.   The coloration is subtle, often with streaks of white or paler violet and darker veins.   The sexual parts - two pairs of stamens and a double-lobed style – are mostly hidden within the flower’s throat.  You can see them shadowed in the previous photo.


As the flower matures, the calyx enlarges and becomes more purple-tinged.  It ultimately forms a dry, persistent seed capsule that contains four smooth, round, dark seeds.  You can see flowers at all stages of development in the photograph above.


The main pollinators of Fragrant pitchersage are the large bees, primarily bumblebees.   But hummingbirds and large butterflies, like the Monarch seen above, also visit the flowers with some regularity.  We suspect they also contribute some effort to the pollination process.  The flowers in our gardens produce abundant seeds; the pollinators are efficient, whomever they may be.


Fragrant pitchersage is not particular about soil texture.  We’ve grown it in both sandy and clay soils; it may do a little better in clays, but is possible in either extreme.  Providing the correct light conditions is a bit trickier.  Plants become leggy and are short-lived in too much shade; but they also balk at hot, sunny conditions.   The ideal is bright shade (on the north side of a wall or tall hedge) or a place with good morning sun and a little afternoon shade.


As with many chaparral shrubs, Lepechinia fragrans is quite drought tolerant once established, but tolerates occasional summer water.  If you live in the lowlands of Western Los Angeles or Orange Counties, watch the weather reports for the surrounding foothills.  If the foothills are getting rain, you might want to give your Lepechinia a little artificial ‘rain’.


On the whole, Lepechinia fragrans is easy to grow.  Fresh seeds germinate with no special treatment, and seedlings mature quickly into elegant plants.  Tip-prune shoots during the growing season to produce a plant that’s bushy and full.  That’s really about all that’s required; this plant is not usually bothered by pests.  Unlike other Lepechinias, this species does NOT respond well being severely cut back in the fall.

﻿
While Fragrant pitchersage has a reputation for being short-lived, it’s well worth a spot in your garden.  Plant it as a specimen plant in a place of honor.  Since it takes some shade, it can be used in narrow side-yards and on the north side of walls.  We like it as a background plant in mixed beds with Douglas iris, Heucheras, hummingbird sage and other native mints and woodmints.  And while we’ve never grown it in a container, we’ve seen a nice example at Rancho Santa Ana Botanic garden.


Be sure to locate it where you can enjoy the flowers – and the hummingbirds, bees and butterflies – close at hand.  Place it where you can easily rub the leaves for a quick ‘pick-me-up’ as you walk by.   Harvest leaves for use in fresh spring tea; you’ll probably also want to dry some for later use.  Fragrant pitchersage makes a lovely iced tea in summer and can be made as a sun tea (see http://mother-natures-backyard.blogspot.com/2012/06/making-tea-from-california-native-mint.html).


In summary, Lepechinia fragrans is a joy to behold – in bloom or not – and a must for aroma gardens. It’s part of our vanishing natural heritage here in Los Angeles County; it ties us to the land and the wild bounty of our local foothills.  We hope you’ll consider it for a brightly shady area of your own garden.


For more pictures of this plant see: http://www.slideshare.net/cvadheim/lepechinia-fragrans-web-show

We welcome your comments (below).  You can also send your questions to: mothernaturesbackyard10@gmail.com
Posted by Mother Natures Backyard at 7:57 AM