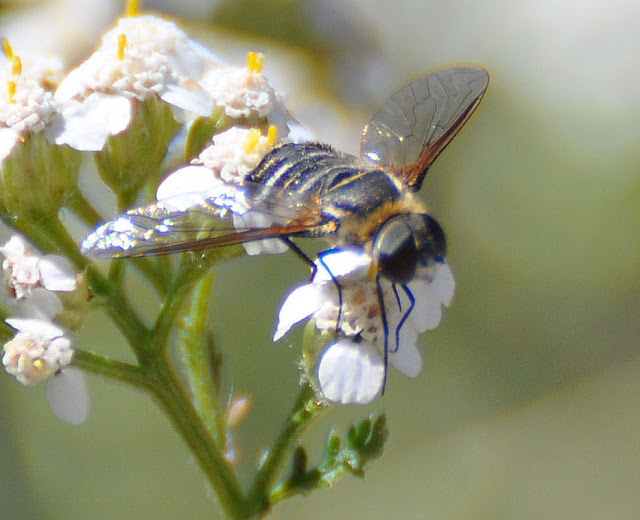 Regional gardeners are learning to appreciate native pollinators, in part due to the activities of National Pollinator Week (the 3rd week in June).  While most people think of bees when they hear the word ‘pollinator’, in fact a wide range of animals function as pollinators.  To learn more about pollinators in general see our June 2013 posting (http://mother-natures-backyard.blogspot.com/2013/06/life-friendly-gardening-planning-for.html).


Among the bee-like insects that serve as pollinators are the Bee Flies.  The Family Bombyliidae is a large family of flies with literally hundreds of genera and thousands of species worldwide. The exact number of species is currently unknown, due to a significant lack of research on this family.  For a good review of the main types of  flies seen in Southern California see: http://waynesword.palomar.edu/redmite6.htm


Like the native bees, Bee Flies range in size from almost microscopic (1 mm/0.05     inches) to large (40 mm/1.5 inches).   The evolutionary relationships between members of this family – and between this and other insect families – are currently poorly understood.   For more on this topic see: http://en.wikipedia.org/wiki/Bombyliidae


Many species superficially resemble bees; hence the common name ‘Bee Flies’.   Their bodies tend to be compact and dense (like a bee) with a rounded head; their coloration may also mimic that of bees.   However, Bee Flies differ from bees in several important ways: 1) a single pair of wings (bees have two pairs) held in a characteristic, swept back (‘bomber’) position when perched (see above) ; 2) no stinger; 3) very large, compound eyes (compare above); 4) segmented antennae; 5) mouths adapted to sucking; 6) long, thin legs (see above).


Bee Flies usually are black or dark gray in color, sometimes with yellow, gold or white. Their segmented abdomens (the ‘tail end’ part of the insect) may have alternating dark and light segments.   They also tend to be hairy; prominent hairs are often visible on head, thorax (mid-segment) and abdomen (see photo above).


Adult Bee Flies feed on nectar and (sometimes) pollen.  In fact, many have mouth parts adapted for feeding on a particular species/group of plants (an example of specialization). Many have a long proboscis (tube-like, sucking mouth part) for sipping nectar.  Unlike a butterfly proboscis, which is slender and uncoils for feeding, the Bee Fly proboscis is stout and rigid.  You can often observe it in a good photograph of a Bee Fly.


Unlike bees, Bee Flies often don’t actually land when feeding.  They hover above the flower, steadying themselves with their front legs.  In fact, the front legs in some species are notably shorter and more slender than the other legs - an adaptation to hover-feeding.   This hover-feeding behavior may be the first clue that you’re observing a Bee fly, not a bee.


While not as specialized as the bees, Bee Fly species are thought to be important pollinators, particularly in dry climates.  Their frequent visits to flowers and hairy bodies facilitate the movement of pollen from flower to flower.  They likely function as pollinators in local gardens as well as in the wild.


The larvae of Bee Flies are predators or parasites of other insects, often the larvae or juveniles of ground-dwelling bees and wasps, butterflies/moths, grasshoppers,  beetles, Neuroptera (lacewings, antlions)  and other Diptera (flies, gnats, midges).  Many Bee Fly larvae are generalist predators; they feed on several species, depending on availability.  Eggs are often laid in or near insect burrows, providing the larvae with easy access to food..


While the larval food aspect can be alarming (particularly for those interested in conserving the solitary native bees), Bee Flies may actually play an important role in controlling populations of grasshoppers, beetles and other pest insects.   They are a normal part of the local ecosystem, helping maintain the balance of plants, insects and other creatures.   A functioning, sustainable garden ecosystem should also contain some Bee Flies, at least in dry areas like Southern California.


A number of Bee Fly species are known from Southern California, particularly in the wilds. The best source of photos that we’ve found is Dr. Peter J. Bryant’s  Natural History of Orange County and Nearby Places : http://nathistoc.bio.uci.edu/diptera/Bombyliidae.htm    Unfortunately, local Bee Flies  are not well-studied; so the number of species and details of their life history are poorly documented.  While this lack of information is lamentable, it also presents a great opportunity for the observant citizen scientist.   In our next posting (July, 2015), we’ll give some hints on photographing and studying pollinators.


The Bee Fly species we see with some regularity in local native plant gardens is Villa lateralis. The genus Villa contains over 250 species, found on all continents except Antarctica.   In the U.S., most Villa species tend to be western.


Villa flies have rounded heads, clear or smoky wings with a distinctive, simple vein pattern, and a ‘chunky’ body with striped abdomen.    The genus has not been extensively studied, and the last North American taxonomic review is over 100 years old [1].  Hence, it may be difficult to key individuals out to the species level.   In fact, the exact number of Villa species is not currently known.


The local Villa lateralis (also known as Anthrax lateralis var. perimele) is widely distributed from North America to Panama, including Southern California.   The species has variable morphology and can be difficult to classify. Individuals from Eastern North America appear to be distinct from those of the West.


Local individuals we’ve seen have black bodies with prominent gold-yellow hairs on the thorax.  The abdomen has alternating stripes of black, yellow-gold and white (see below).   If you look closely you can see the different colored hairs on the stripes.  The alternating colored stripes are the most distinctive feature seen with the naked eye.

The wings of Villa lateralis have a simple, characteristic vein pattern (see above and   http://www.drawwing.org/insect/villa-lateralis-wing).  The proboscis is stout and not overly long – about as long as the width of the head.  You can see it in the photograph above, as the insect sips nectar from a Yarrow flower.


This species seems to favor plants in the Sunflower family (Asteraceae), at least in local gardens. We’ve observed them most often in June and July in native plant gardens.  We’ve seen them feeding on late-blooming bush sunflowers (Encelia californica), common Yarrow (Achillea millefolium), Goldenrods (Solidago species and Euthamia occidentalis), Telegraph plant (Heterotheca grandiflora) and Goldenbushes (Hazardia species).  The Natural History of Orange County and Nearby Places has several photographs of Villa lateralis on Buckwheat (Eriogonum species) and Alkali heliotrope (Heliotropium curassavicum var. oculatum) flowers; we’ll need to look for them on these garden flowers as well.

In a study in Oregon [2], Villa lateralis was found to be a specialist pollinator for several Asteraceae species (Erigeron foliosus; Eriophyllum lanatum; Haplopappus hallii; Solidago Canadensis).   We suspect that it may be functioning as a pollinator in local wildlands and gardens as well.  We hope some enterprising student will study this species in depth sometime soon!


For pictures and more information on this interesting species we recommend:


1.      D.W. Coquillett – Monograph of the species belonging to the genus Anthrax from America North of Mexico.  Transactions of the American Entomological Society and Proceedings of the Entomological Section of the Academy of Natural Sciences Vol. 14 (1887), pp. 159-182.  http://www.jstor.org/stable/25076488


2.       D. Yu - How do the pollinators' flower preferences affect the features of the pollination network? http://eco-informatics.engr.oregonstate.edu/previous/2014/Yu_paper.pdf


We encourage your comments below.   If you have questions about Bee Flies or other gardening topics you can e-mail us at :  mothernaturesbackyard10@gmail.com
Posted by Mother Natures Backyard at 7:40 AM