Both Allen’s and Anna’s Hummingbirds visit Mother Nature’s Backyard regularly, so we try to have something blooming all year long. Last month (Feb 2014) we featured another great hummingbird plant – Golden currant.   Right now the favored plant is the Hummingbird sage that’s blooming near our back porch.


Hummingbird sage is a Salvia (sage), though its growth habit differs from the woody shrubs and sub-shrubs we typically associate with local sages.   The name Salvia is derived from the Latin salveo meaning "to save"; many of the salvias are still used medicinally and ceremonially.  The name spathacea means "with a spathe", which refers to the large, colorful bracts that enclose the flower cluster.  This plant is sometimes known as Borraja Silvestre, Diosa or Diosita in Spanish.  All Salvias are in the Mint family, Lamiaceae, which contains the garden mints and many other aromatic herbs and shrubs.


Hummingbird sage grows from Solano County, CA in the north to Camp Pendleton in San Diego County.   It’s found at lower elevations (< 2500 ft) and mostly within the coastal hills and valleys.  It still grows in many spots in the western Santa Monica and Verdugo mountains.  In Southern California,  this species is typically found in shaded areas in coastal scrub, coastal sage scrub, chaparral, and coastal live oak woodland. It’s usually seen on north- and east-facing slopes and under oaks. Further north it can be found in more open sites in the same plant communities.

As seen in the photo (above), Salvia spathacea is a low-growing, mostly herbaceous, ground cover.   With a little summer water, it’s evergreen most of the year.   The foliage is primary low, to perhaps 18 inches; the flower stalks attain 2 to 2 ½ feet in height.  Plants have a spreading habit, typical of the Mint family; they increase in size via rhizomes (underground stems) and will ultimately fill an area if happy.   In fact, they are one of our most useful groundcovers in areas that are a bit shady.


The leaves of Hummingbird sage are large (to 4-6 inches; 10-15 cm), arrow-shaped to oblong, and succulent.  Leaves are opposite, typical of the Mints, and are mostly clustered in a basal rosette (cluster of leaves at the base of the stalk).  The upper leaf surfaces are coarsely crinkled while the lower surfaces are covered with hairs. The leaves are quite sticky and sweetly scented.  In fact, Hummingbird sage leaves are one of our favorites for tea, hot or cold.  For more on making tea from native mints see: http://mother-natures-backyard.blogspot.com/2012/06/making-tea-from-california-native-mint.html.

While Hummingbird sage ultimately forms dense mats, its growth rate varies greatly depending on conditions.  It spreads more quickly in moist clay soils; more slowly in sandy coastal soils.   On a well-drained slope, it may take 4-5 years to provide complete coverage.  The photo above shows a large, relatively flat area covered with Hummingbird sage.  It looks lovely year round.


The main bloom season for Hummingbird sage is in the spring.  It often begins in February in local gardens (even January in a warm winter) and continues through March or April.  In the garden setting, plants will often bloom sporadically from spring to fall depending on available moisture.   But the main show is early to mid-spring and it can be impressive!
Hummingbird sage is one of the showiest bloomers of our native Salvias.  The 2-3 ft tall flowering stalks contain several whorls of flowers surrounding the stem.  The individual flowers are large (to 1 inch long), pink to magenta, and shaped like a typical Mint flower.  The flowers have 5 fused petals and 5 fused sepals, giving them a bilateral symmetry (two halves that are mirror images).   The bracts (fused sepals) are usually a dark purple/magenta, contrasting nicely with the brighter flowers.


The pollen-bearing stamens extend beyond the petals.   The pollinators (hummingbirds) pick up the pollen on their heads and bodies as they reach deep within the flowers to reach the nectar.  Pollen is then deposited, unintentionally, at the next flower.  The long stamens, tubular shape and color of the flowers all suggest a long-standing, mutually beneficial relationship between hummingbirds and Salvia spathacea.   Seed-eating birds enjoy the dried seeds. 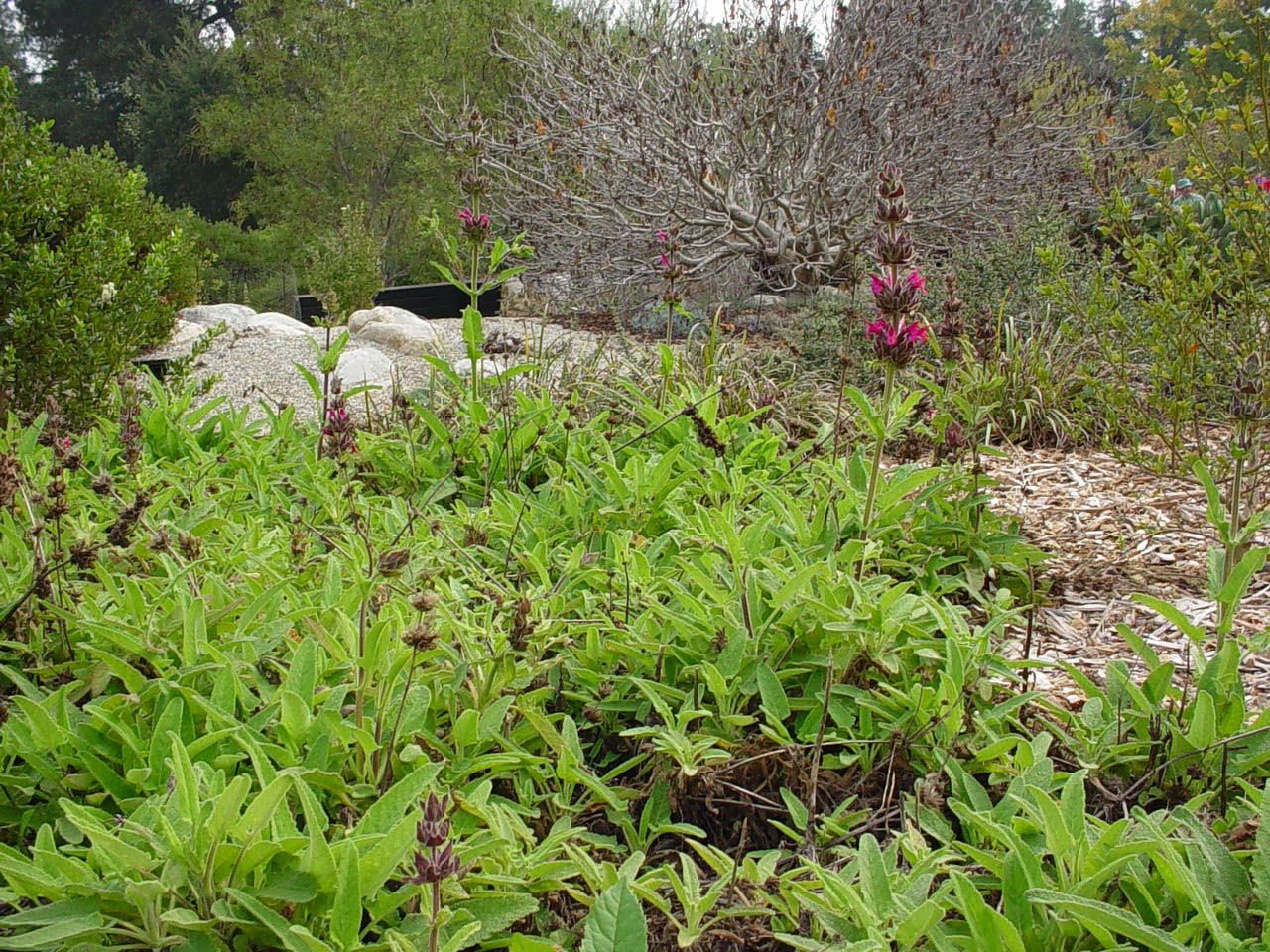 Hummingbird sage is usually used as a groundcover, often in partly shady areas under trees, on the north or east side of walls, etc.   It also can be grown on coastal bluffs (tolerates salt spray) and is a good choice for slopes and banks in general.  We’ve grown it on a 24% grade (fairly steep) where it does well, successfully binding soil and preventing runoff.    It is striking alone when grown in broad swaths.  We also like to combine it with the Wood mints (Stachys species), Catalina perfume (Ribes viburnifolium), Yarrow (Achillea millefolia) and even Berkeley sedge (Carex tumulicola).   Under California native oaks, consider planting it with Ribes species, the Snowberries (Symphoricarpos species), native ferns, native honeysuckles (Lonicera species) and Fendler’s meadowrue (Thalictrum fendleri).


In western Los Angeles County, Hummingbird sage is best with some shade except on the immediate coast.   Dappled shade or morning sun is best for plant health and abundant blooms.   We’ve grown this plant successfully in soils ranging from dense clays to very sandy – it does fine in both extremes.
﻿ ﻿


While actually quite drought tolerant once established, hummingbird sage looks best with occasional summer water (Water Zone 2).  We water ours about once a month from June to Sept. (our dry season), making sure that the ground is dry at a depth of 4 inches before watering.  Try to water on a day that’s a bit overcast/cooler if possible – and water either very early morning or in the evening.   Some gardeners like to rinse off the leaves occasionally in summer.   The only other ‘management’ required is removing the spent flower stalks, which can be done anytime from summer to fall.  Let the birds eat the seeds, then prune off the stalks before they drive your tidy side crazy.
As mentioned above, Hummingbird sage leaves make wonderful tea – probably the main use for this plant over the millennia.  The tea can be used to make delicious jelly or syrup.   Native Californians also use the tea for colds and sore throats and the plants do produce mild antimicrobial chemicals.  A warm bath with the leaves is used for rheumatism and other joint pains.   You can chew on the leaves on a hot day to make you feel less thirsty.   And the flower stalks (even dried) make a unique contribution to flower arrangements.


For more pictures of this plant see: http://www.slideshare.net/cvadheim/salvia-spathacea-web-show

Posted by Mother Natures Backyard at 6:48 AM