The native plants of western Los Angeles County include a number of species with pale green, gray and white foliage.  These plants provide welcome texture and color to local gardens;  one could design an interesting garden based on foliage contrasts alone.   One of the lightest colored foliage plants is the Felt-leaf Everlasting, Pseudognaphalium canescens.  It’s blooming now in Mother Nature’s Backyard.


Our local subspecies, Pseudognaphalium canescens ssp. microcephalum,  is common from central California to Baja California, Mexico.   It usually grows in the southern coastal prairie, chaparral, coastal sage scrub, and southern oak woodland plant communities, on dry slopes and other open spaces at elevations under 4000 ft.    Several other subspecies are found throughout California, including in the San Gabriel Mountains of inland Los Angeles County.


Pseudognaphalium canescens ssp. microcephalum has several common names: Wright’s Cudweed,  San Diego Rabbit-tobacco and Felt-leaf Everlasting.  We prefer the latter because it best describes this lovely plant.    Along with related species in the Sunflower family (Asteraceae), Felt-leaf Everlasting has been the subject of recent taxonomic debate.  Formerly classified in the genus Gnaphaleum (Gnaphalium canescens ssp. microcephalum;  Gnaphalium microcephalum), there is still some debate as to whether the plants currently classed as sub-species of P. canescens might better be regarded as separate species (e.g. Pseudognaphalium microcephalum).1 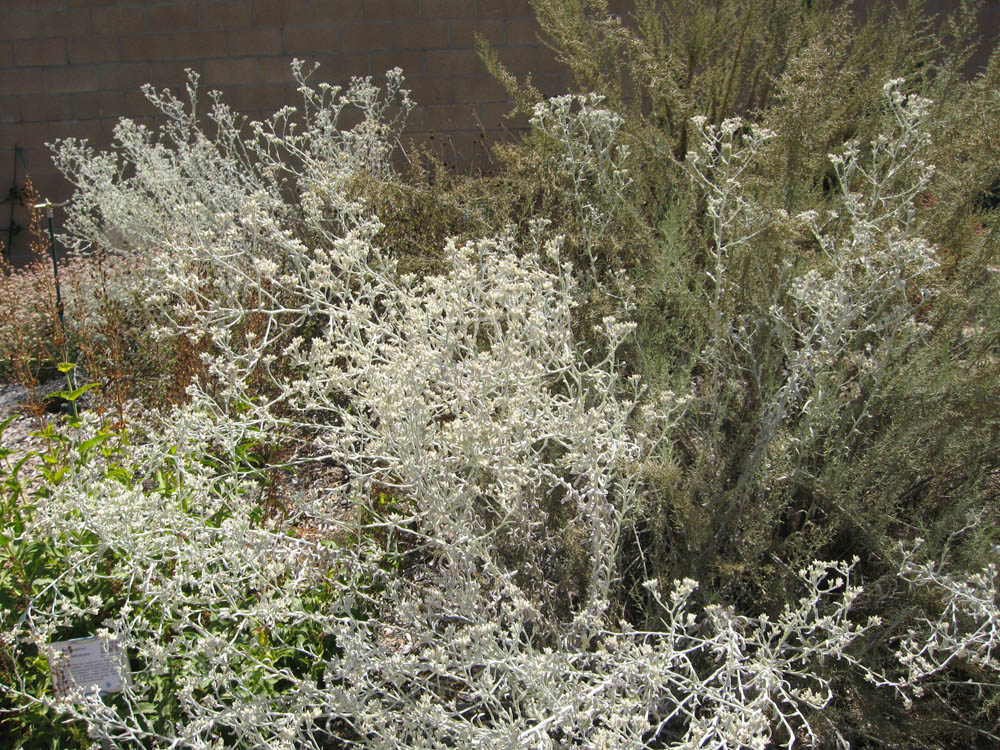 Felt-leaf Everlasting is a biennial or short-lived perennial in our area.  It grows in a mounded to spreading shape of 2-4+ ft. tall and wide.  The stems are primarily stiff but not woody and the foliage has little fragrance.   The leaves are alternate, simple and lance- or spoon-shaped, becoming smaller near the tips of stems.  The most conspicuous foliage feature is its color, which ranges from pale green to almost white depending on light conditions and time of year.  The light color is due to dense white hairs which cover the leaves and stems (see photo below).   The hairs are efficient at harvesting moisture from fog, as seen in the photo. 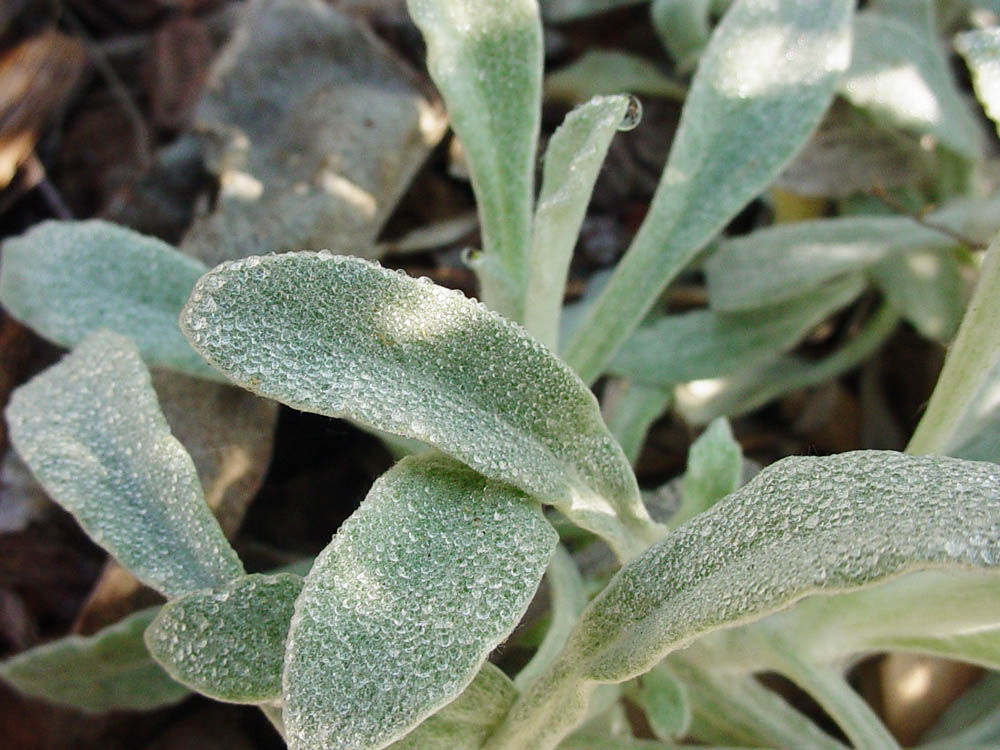 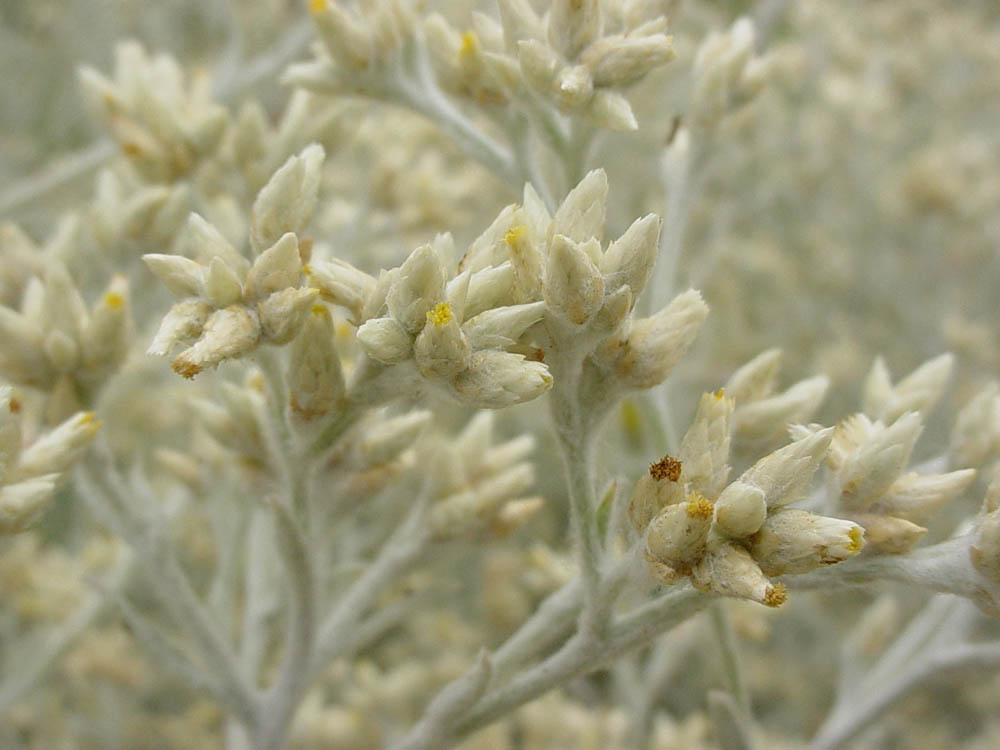 The flowers are typical for local native Everlasting species.  The flowering heads, which contain a number of flowers, are narrow and located primarily at the ends of branches (see photo above).  Flowering can occur anytime from summer through fall.  Similar to other plants in the Sunflower family, Felt-leaf Everlasting has two kinds of flowers: yellow-green disk flowers (most conspicuous) and small ray flowers. The flowers are pollinated by small insect pollinators, primarily native bees and flies.  The seeds are small and distributed by wind.  The dry bracts remain on the stems for months – hence the common name ‘Everlasting’.   They can be used for floral arrangements. 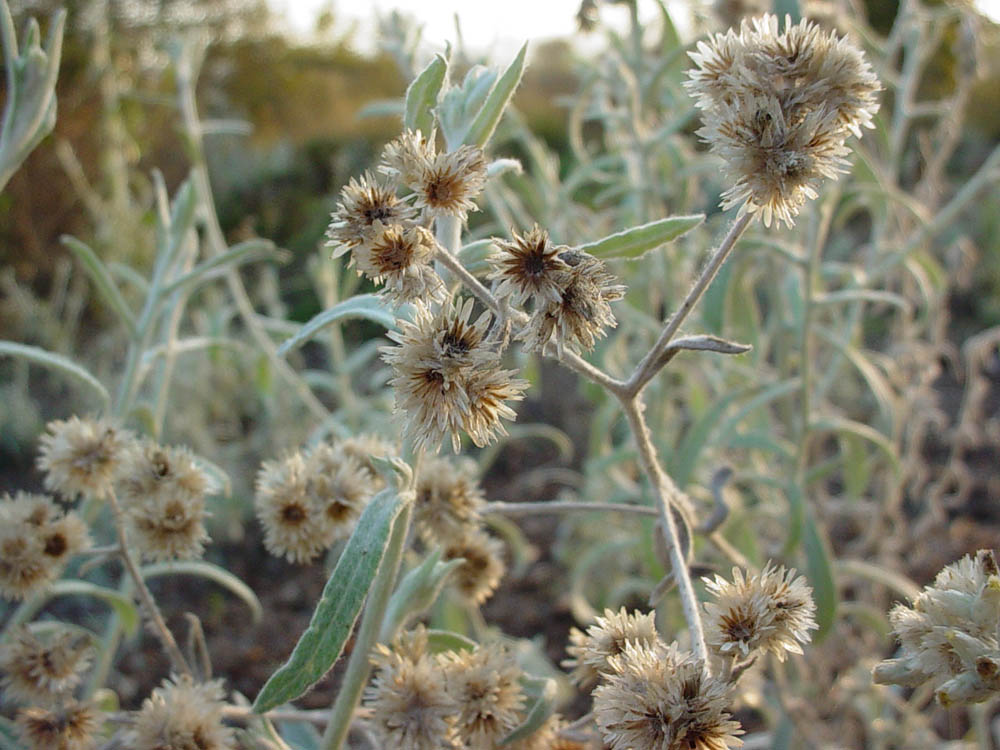 Felt-leaf everlasting does well in full sun or part-shade.  It grows in a wide range of soil textures and tolerates soils that range from slightly acidic to alkali (pH 5.0-8.0). It needs winter/spring moisture, but then is very drought tolerant.  An easy plant to grow, it will re-seed in most gardens.  Mature plants die after 2-3 years and are easily removed in the fall/winter and unwanted seedlings can be removed in spring (you’ll know them by their distinct white color).   Count on this plant ‘moving around’ in your garden over time. 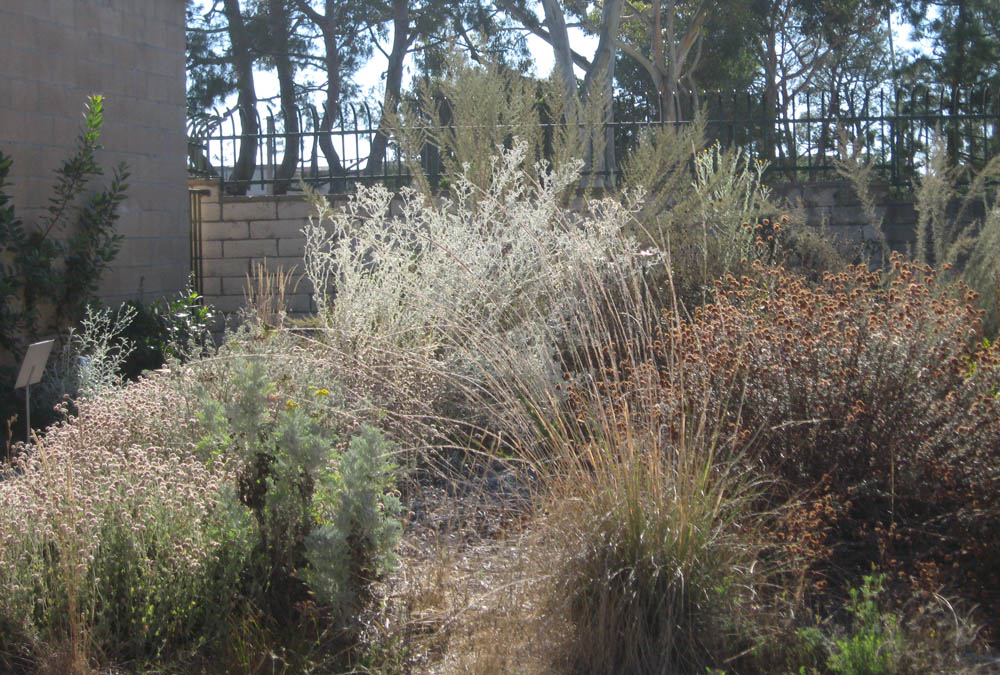 Felt-leaf Everlasting is often planted for its foliage color.  It complements other silver-colored foliage plants and looks particularly nice with the russet tones of fall Buckwheats.   The white foliage looks fresh with spring wild-flowers and grasses.  The plants will grow around shrubs, filling in open spaces with their airy foliage. 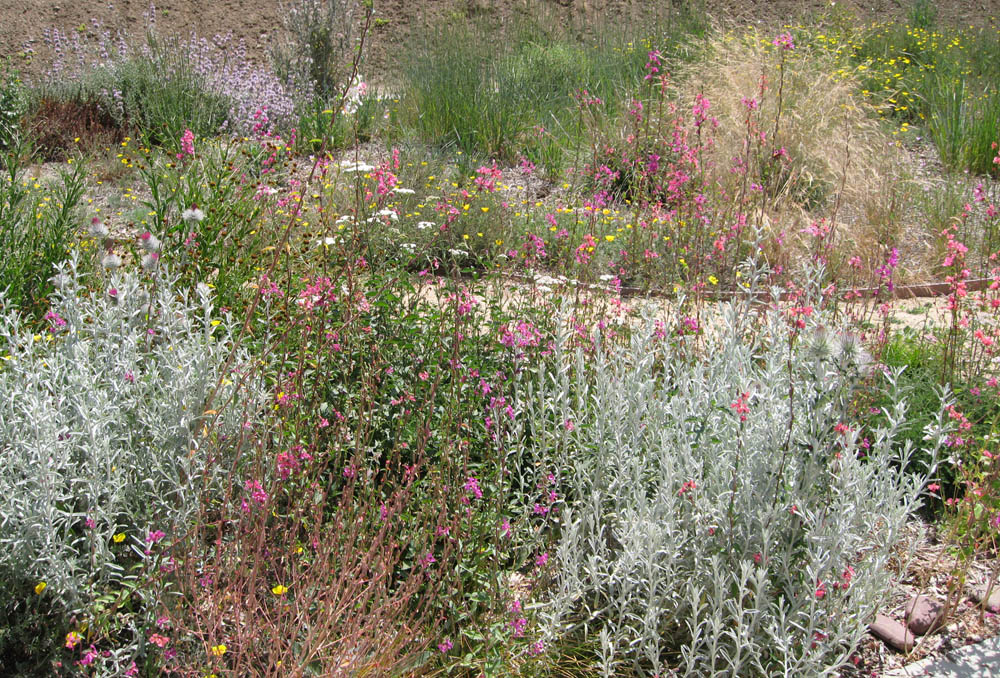 An added benefit of planting Felt-leaf Everlasting (and other Everlastings) is its habitat value.  The foliage is an important food source for the American Lady butterfly (Vanessa virginiensis), a frequent visitor to local gardens.   Careful inspection of the foliage will tell you if caterpillars are present.  They build distinctive larval nests from leaves and fuzzy hairs (see photo below).  Larvae hide in the nests during the day, emerging at night and on cloudy days to feed.

Posted by Mother Natures Backyard at 6:54 AM