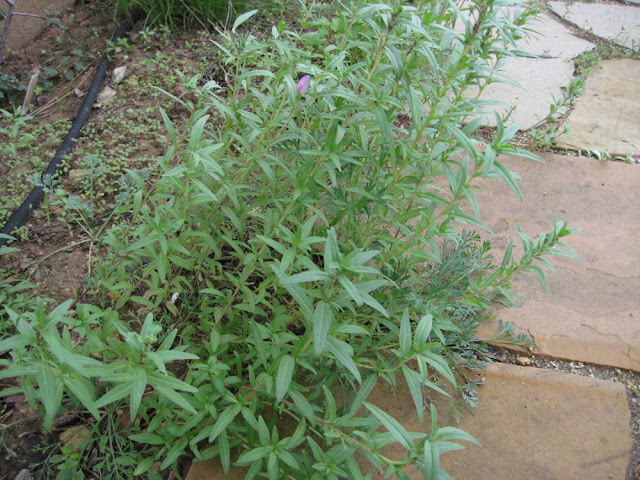 January is an exciting time.  Winter rains are stimulating cool-season grasses to produce new leaves.  Some native trees and shrubs (like Ceanothus and Manzanitas) are preparing to bloom.  But one of our favorite January activities is watching the annual wildflowers spring to life.   Some germinate with the first rains.  And some, like our Purple Clarkia, have even produced a few blooms this early in the season.
Purple Clarkia (Clarkia purpurea) is a member of the Onagraceae  or Evening Primrose/Willow Herb family.  This family includes a number of lovely flowering plants including garden fuschias, California Fuschia, the Evening Primroses and the Suncups (Camissonia species).  Plants in the family Onagraceae are particularly common in western United States.   Seeds of many Onagraceae were taken to Europe in the 1800’s, where they were incorporated into classic cottage gardens and flowering borders.
The genus Clarkia is named in honor of Captain William Clark of the Lewis and Clark Expedition that explored the U.S. Pacific Northwest in the early 1800’s.   The genus is composed almost entirely of annual wildflowers native to temperate western North America.  Purple Clarkia can be found as far north as British Columbia, Canada and as far south as Baja California, Mexico.   Locally, it grew widely from the coastal prairies to the foothills of Los Angeles County.  You can still find native populations on the Palos Verdes Peninsula and in the Santa Monica Mountains.   Like other annual wildflowers, local populations fluctuate widely depending on winter precipitation.  If the rains continue, this should be a good year for wildflowers!


Purple Clarkia is sometimes known by several former scientific names: Clarkia quadrivulnera, Godetia lanata, Godetia purpurea and Godetia quadrivulnera.    Characteristics vary widely across its geographic range, in part explaining the plethora of former species names.  Our local subspecies (quadrivulnera) usually has a pink or magenta splotch on each leaf – but not always.   Confusingly, it is sometimes called Purple Godetia, Purple Fairy-fan, Winecup Clarkia, Winecup Fairy-fan, Small-flowered Godetia, Four-spotted Clarkia and Four-spotted Fairwell-to-Spring.  These common names sometimes refer to several subspecies or to several different  Clarkia species.   Common names can be confusing – that’s one reason to use the scientific name when referring to a plant. 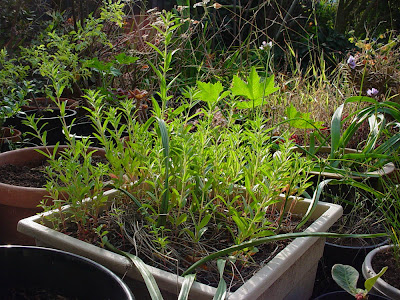 Purple Clarkia has enchanting flowers that entice many of us to include them in our gardens.   Like most Onagraceae the flowers come in parts of four – four petals, four sepals, etc.  Unlike some in this family, the flowers are open in the daytime and closed at night.  Not surprisingly, Purple Clarkia is primarily insect pollinated and attracts native bees and other day-flying insects.  The stamens (pollen producing part of the flower) are prominently located for easy pollen transfer.  You can see the stamens – their anthers covered in white pollen – in the photograph below. 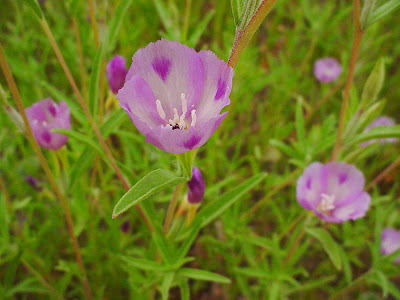 Our local variant of Purple Clarkia (see above) has particularly attractive flowers.  The petals are lovely iridescent shades of purple-pink with the characteristic magenta splotch and irregular outer edges.  The coloration and shape of the petals explains the common name ‘Fairy-fans’.  Children sometimes use the petals as fans for their dolls as well.  Purple Clarkia is a spring bloomer – usually beginning in January or February in our area, but sometimes later.  It makes a lovely cut-flower and adds a pastel accent to spring bouquets and floral arrangements. 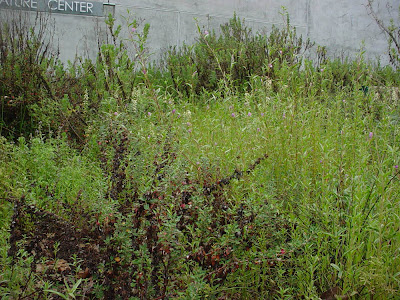 As seen above, Purple Clarkia is an erect annual wildflower that’s 1-2 feet tall. The thin stem may be un-branched or openly branched, usually above the mid-point.    The stems are often tinged with red or purple and may have a few hairs or not.  The leaves are simple, linear to oblong and a soft green color.  The plants have a thin taproot that allows them to access soil water.


In the wilds, Purple Clarkia grows in clusters of several hundreds to thousands of plants.  Locally, it occurs in sunny, grassy areas on the Palos Verdes Peninsula.   In gardens, Purple Clarkia is often included in wildflower gardens with other California natives.  It adds a nice accent to areas planted in native grasses.  It is a great Spring filler  between shrubs and perennials; it’s particularly useful when newly planted  shrubs are small.   You can even use Purple Clarkia to attract pollinators to your spring vegetable garden and it does great in containers.

Purple Clarkia is easy to grow in most gardens.  It likes full or part-sun and needs adequate winter/spring moisture until it finishes flowering.   Like others in its family, the seed pods (capsules) of Purple Clarkia open when dry, releasing thousands of tiny seeds (see above).  You can collect the seeds for next year or just let them re-seed naturally.   To collect the seeds the easy way cut the dried plants at ground level, invert entire plants into a large paper bag and let the seeds drop into the bag.  You can get more seeds by knock the bag firmly on the edge of a table.   Store the seeds in a jar or envelope in a cool, dark place.


Did you enjoy this article?  Find it useful?   Please tick the appropriate box below.

Posted by Mother Natures Backyard at 8:22 AM