This month’s plant is currently so small that you probably missed it if you visited the garden (see above).  But just wait – it soon will be one of our biggest plants!  For many of us, summer is the season of the elderberry.  Between bird visitors, fragrant flowers and ripe berries it’s hard to beat our native Blue Elderberry.  And even though our plant is very young (about a year and a half), if you look closely you can see both flowers and berries this summer.


The taxonomy of Blue Elderberry (sometimes also called Mexican Elderberry) has been the subject of some debate.  While confusing to the home gardener, this debate results from a genuine interest in classifying the species correctly.   As of 2012, the consensus opinion recognizes two variants of native North American ‘dark elderberries’: Sambucus nigra L. ssp. canadensis (American Black Elderberry) and  Sambucus nigra L. ssp. cerulea (Raf.) R. Bolli (our western Blue Elderberry).  The Elderberries are members of the Caprifoliaceae (Honeysuckle)  Family. 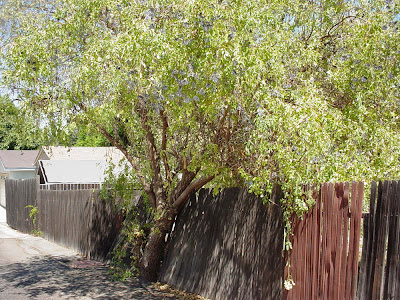 Blue Elderberry has previously been called Sambucus cerulea, Sambucus caerulea, Sambucus mexicana, Sambucus glauca,  Sambucus neomexicana and several other scientific names.   Some of the taxonomic confusion doubtless reflects its wide distribution in western North America, from southern Canada to northern Mexico.  Widely distributed species are sometimes known by different names due to historical reasons.  But there are regional differences in Blue Elderberry’s appearance.  Some botanists and nursery people feel that ‘lumping’ them all together has obscured genuine biologic differences; so the taxonomy may change yet again in the future.  For now, just remember that you may encounter Blue Elderberry under any of the above names.


Where ever it occurs in the West, Blue Elderberry grows in moister areas within more dry surrounding habitats – or drier, more open areas in woodland habitats.  Blue Elderberry grows where its roots can access deeper water.  It’s not uncommon to find Blue Elderberry growing on river banks (a bit away from the water) or on slopes that get a little extra winter water.   It traditionally grew near our larger seasonal streams and on upland banks along the L.A. River and its tributaries.  There are still some nice native stands on the Palos Verdes Peninsula and in the western Santa Monica Mountains.  In fact, a tree from the northern side of the PV peninsula was the source for our garden’s specimen. 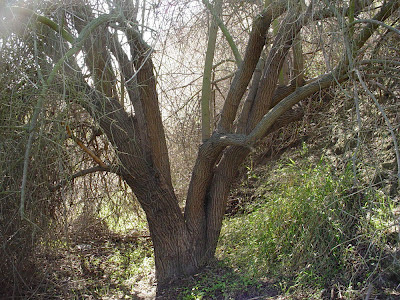 In areas with cold winters, most of the new growth dies back each winter.  The cycle of winter die-back and spring re-growth produces a large shrub 6-8 ft. tall and wide.  In areas with mild winters (like ours), Blue Elderberry can become much larger, ranging from a very large shrub (8-10 ft wide and 8-15 ft wide) to a small tree.  With optimal water it becomes a nice sized tree up to 20-25 ft tall with a respectable trunk  (see above – the source tree for the Elderberry in Mother Nature’s Backyard).


Blue Elderberry is winter- and drought-deciduous,  losing its leaves for several months of the year.  In most home gardens, the leaf drop occurs in winter – usually sometime between early November and December in our area.  Under drier conditions, plants may lose their leaves as early as late summer.   Elderberries re-leaf quickly in winter or early spring – usually in late January or February in western L.A. County. 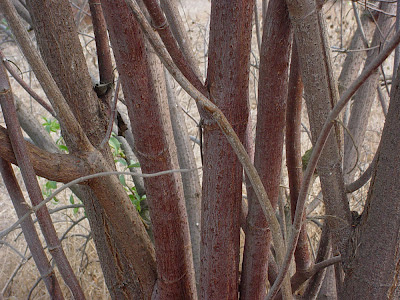 Several features make Blue Elderberry an attractive plant.  Even in winter,  its furrowed, red-brown bark provides interest in the wilds or in a garden.  The bark contrasts nicely with the pale green color of the leaves.  The leaves are compound - made up of several leaflets – and somewhat succulent.  Overall, the foliage has a lacy appearance although the shade under an Elderberry tree can be anything from dappled to quite dense depending on how the plant has been pruned. 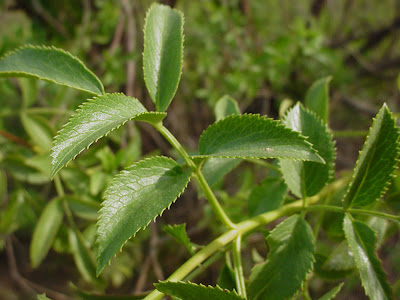 Elderberry has small, cream/yellow flowers growing in dense clusters,  mostly at the ends of branches.  Elderberries can begin flowering as early as May and may flower off and on throughout the summer.   The flowers have a wonderful aroma – somewhat like spiced honey – that perfumes the air on warm summer days.  This is just one of the benefits of using Blue elderberry as a shade tree.   If you like the scent, you can use the flowers to make elderflower tea, syrup and even jelly.  Just collect ripe flower clusters (your nose is your best cue), remove the green stems, wash with cool water,  then cover with hot (almost boiling) water.   After about 10 minutes you can strain out the flowers and drink the ‘tea’ or use it to make syrup or jelly. 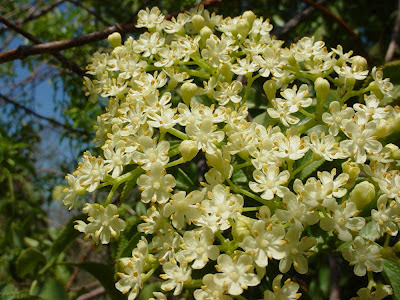 The berries for which Blue Elderberry is famous start out small, hard  and green. In the warm summer months they grow, turning first a dark (almost black) purple, then soft and blue when fully ripe (hence the common name).  The blue color is due to a waxy ‘bloom’ that covers the berries.   Most Elderberry trees/bushes have a ‘main ripening event’ sometime in summer (July or August) with additional clusters ripening before or after.  In our next post (mid-August, 2012) we’ll discuss harvesting, cleaning and preparing Elderberries.  Later in the month we’ll share some of our favorite Elderberry recipes. 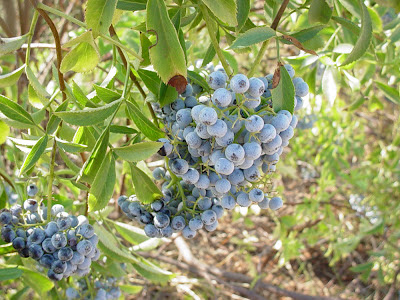 Blue Elderberry is a good habitat plant for the home garden.  It’s large enough to provide perches, cover and nesting sites for birds.   In summer and fall, a wide range of birds eat the fruits/seeds including finches, warblers, jays, orioles, bluebirds, grosbeaks and the Northern Mockingbird.  Some migratory birds seem to prefer the dried berries over the fresh.    Our most common pollinator seems to be the European Honey Bee.   But you’ll also see some native bees, flower flies and other potential pollinators visiting the flowers.


Blue Elderberry can be grown in soils ranging from quite sandy to fairly dense clays.  It doesn’t like salty soils or seaside conditions, but does well in gardens only a half-mile or so from the ocean.  It likes sun, but can tolerate some shade.  Established Elderberries are quite drought tolerant, but they produce best – and keep their leaves through the fall – if given an occasional deep watering in summer (Water Zone 2 - see our posting on Water Zone Gardening (April, 2012) for more on Water Zones).


Blue Elderberry makes a nice addition to the home garden.  With a little yearly pruning, it can make a nice shade tree (see above).    Elderberries are also valuable plants for slopes and stream banks.  If you have a large property they make a lovely large shrub that requires little effort.


Elderberries take a few years to become established.  In our experience, the establishment period takes longer in sandy soils (3 to 4 years) than it does in clay soils (about 2 years).   During the establishment phase, the plant spends most of its energy establishing roots;  the above-ground growth is slower than many gardeners expect.  Even more alarming, the early branches can be so spindly and low-growing that they appear almost groundcover-like.  Never fear - patience is all that’s required.  Once established,  your Elderberry will grow quickly and can be selectively pruned to a more tree-like shape.  To give you a sense of normal growth  we’ve included a sequence of pictures of a young Elderberry growing on clay soil (below).

Elderberries grow rapidly after the Establishment Phase.  If training your Elderberry into a tree, yearly pruning is essential during the first 5 to 6 years to establish a good form.  New growth can be rampant – 1-2 feet or more per branch – in the spring.  The new growth is relatively soft;  the weight of developing berries causes the branches to droop in a ‘weeping’ pattern almost like a Weeping Willow.   The trick to achieving a good tree form is to prune out downward- and outward-growing branches and prune back to upward-growing branches/buds.  Pruning should be done in winter, when the plant is dormant.  Never prune more than 1/3 of the total mass or you’ll risk harming the plant.  Keep an eye out for suckering – remove suckers from trunk as they emerge in spring.    After 5-6 years you’ll still need to prune out dead/diseased branches and branches that cross/rub – but you’ll need to prune for shape less.


Blue elderberries are a favorite food among native peoples where ever they grow.  The Gabrieleno/Tongva (our local native California tribe) used the hollow stems of  Elderberry to make flutes and clapper sticks (a type of percussion instrument used to beat the tempo during songs and dances).  The straight stems were also used for arrow shafts, pegs and combs.    A dark gray dye was prepared from the berry stems to dye basketry materials.


Blue Elderberry was also used extensively as a medicinal plant.  A wash prepared from flowers or leaves was used on skin sores, bruises and as a skin conditioner.  Tea from the flowers is still used as a tonic and to fight colds.   All parts of Blue Elderberry make plant chemicals that may cause nausea and diarrhea if eaten.  Berries should be ripe – and should be cooked – to insure they are safe to eat.  Elderflower tea is mild, but should be used in moderation.    Be sure that the berries are Blue Elderberries – the berries of Red Elderberry – and the leaves of all elderberries - ARE TOXIC AND SHOULD NOT BE EATEN. 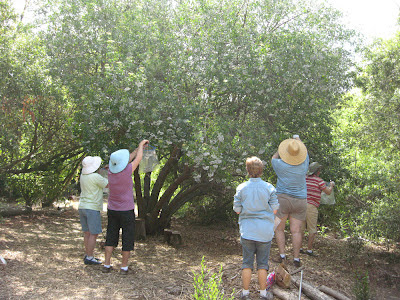 Be sure to read our next post (mid-August, 2012) for tips on picking, cleaning and preparing elderberries.
And here are some photos of the Blue elderberry in Mother Nature's Backyard from 2012-2018. 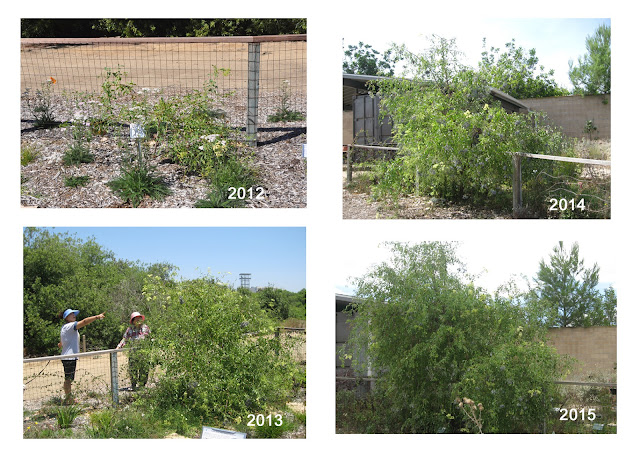 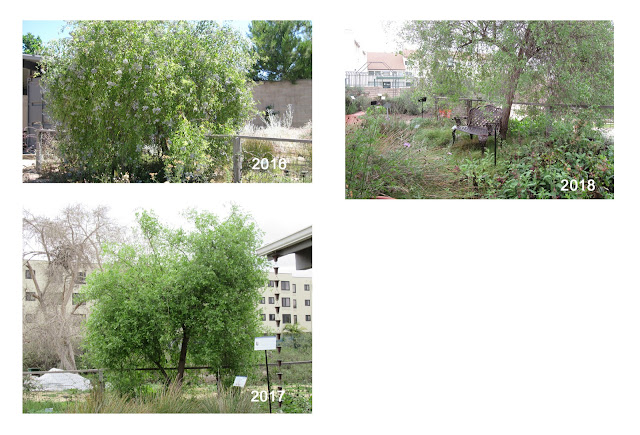