Gardening for Health: 2. The Magic of Scent

There’s something magical about a scented plant.  The heady fragrance of a wild rose, the musky-sweet scent of four-o-clocks at dusk; or the spicy aroma of a native sage on a warm summer day.  The list goes on and on.  Californians are  blessed with many native scented plants; these make our gardens both unique and interesting.  But the scented plants may also be good for our health!


Plants produce fragrant chemicals for a variety of reasons (most having little to do with human beings).  The sweet fragrances of flowers are released to attract  pollinators.  Some are quite specific – like a perfume designed to attract the right admirer.  Others attract all capable of detecting their sweet scent (native bees, butterflies, moths - even humans).


Likewise, the sweet aromas of ripe fruit attract creatures that can disperse a plant’s seeds.   Unripe fruits are usually unscented – or have a repellant odor.   But ripe fruits can be irresistible, due in part to their attractive fragrance.  Plants have methods of seducing animals to do their bidding, and fragrance is a key weapon in their arsenal.

The pungent and minty scents produced by some plant’s foliage have a different function: protection.  Dry mediterranean climates support a number of plants with fragrant foliage.  These include some of our favorite cooking and potpourri herbs: rosemary, sage, thyme, lavender, sagebrush and the mints.  To the human nose, these scents are interesting, exciting and attractive.   That’s why we use them extensively in foods, perfumes and other products.


But many of the fragrant herbs have a repellant odor to herbivores.  From larger herbivores like deer and rabbits to the herbivorous insects, the pungent scents provide a cue that this plant is ‘not fit to eat’.  In some cases, the plant just tastes bad; in others, the plants are actually toxic to the herbivores.   It’s not surprising that scented foliage releases its flavors when crushed.  That’s another example of plant thrift – using expensive chemical resources only when needed.

But what actually produces the scents? Whether released automatically or when crushed, plant scents are due to small, aroma chemicals (odorants) that interact with the sense organs of an animal.   Because they are carried by the air, most aroma chemicals are relatively small.   And the plant-produced odorants have a limited number of basic structures (most are esters, turpenes, aromatics and amines).   But the variants of these basic structures – and their combinations in individual plant species – can produce aromas as varied as the sweet scent of a rose or the putrid odor of the Voodoo lily (smells like rotting meat – attractive only to fly pollinators).


Aroma chemicals interact directly with an animal’s olfactory receptors. In vertebrates, these receptors are located in the nasal passages (the human nose and throat); in insects, the receptors may be located in antennae or other sense organs. But in all cases, odorants bind to and activate the olfactory receptors, resulting in a signal being sent to the brain via olfactory neurons (see below; ref 1). 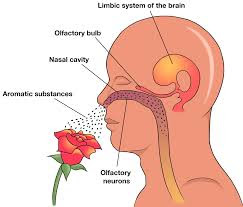 And here’s where things get interesting.  In humans, the olfactory neurons (nerve cells) converge at the olfactory bulb, an area of the brain rich in interconnecting neurons.  Signals from the olfactory bulb are sent to at least five different areas of the brain.   Some of these areas are responsible for decoding the scent: does it smell like any other scent?  Is it a known scent?      But there are also close, direct connections between the olfactory bulb and brain structures important for memories and emotions: what is often called the limbic system.


The limbic system is a series of evolutionarily old structures located deep within the human brain. The limbic system supports a variety of functions including emotion, behavior, motivation, long-term memory and olfaction. [2] It is connected to the more modern, cerebral areas of the brain via the hippocampus. There’s still much to learn about how the limbic system works – or even if the concept of a limbic system is obsolete. But the ‘limbic system’ is involved in some of the more interesting aspects of human interactions with aroma chemicals: scent memories and the associations of particular scents with moods and emotions.


Dr Bryan Raudenbush, Professor of Psychology at Wheeling Jesuit University, notes: ‘Of our five senses, scent is the only one with a direct pathway to three important areas of the brain: the orbito-frontal cortex, which presents you with an awareness of scent, the hippocampus, which is associated with memory, and the amygdala, which is associated with mood and emotions.’ [3]


Common wisdom has long associated certain scents with human emotions or physiologic reactions.  For example, the scent of lavender has long been used for relaxation and inducing sleep.   In aromatherapy, the scent of citrus is thought to be a ‘mood brightener’, along with that of rose, heliotrope and peppermint.   But is there any scientific evidence for the efficacy of these scents to alter moods?


Alas, olfaction is the least-researched of the senses.  But there’s good reason to think that scents do affect our moods and physiology.  The ‘limbic system’ can directly activate the hypothalamus, an important hormonal control center in the brain.   The hypothalamus is responsible for the production of growth hormones, sex hormones, thyroid hormones, and neurotransmitters such as serotonin. These hormones affect energy levels and many other physiologic responses.  So it’s reasonable to hypothesize a physiologic role for hormones in the human response to scents.  And scientific studies are beginning to provide the evidence. [4]

But there’s even more theoretical reason to suspect a direct role for scent and mood. When we smell something nice, receptors in the amygdala release  dopamine and serotonin. [3, 4]  These are powerful neurotransmitters; the former is linked with the high you feel when taking drugs such as cocoaine, the latter with mood. ‘In a nutshell,’ says Dr Raudenbush, ‘You smell something ‘good’, and those scent chemicals stimulate the amygdala, which in turn prompts the release of dopamine and serotonin, and we feel ‘good’.’ [3]


So scents may directly modulate our moods, via the effects of neurotransmitter and/or hormone levels.  But the picture is further complicated by the close relationship between the olfactory neurons and the hippocampus, which is associated with memory.  This part of the brain helps us ‘remember’ a scent – and its likely consequences (for example: ‘this is the scent of White sage’; or ‘smoke = fire’).


The ability to identify scents correctly was key to survival in our evolutionary past.  It helped us find food and avoid harm.  Pleasant plant scents may also have played a role in the human-plant interactions leading ultimately to agriculture.  It should come as no surprise that a good sense of smell developed early in our ancestral past.   And that scent memories are different from other types of memories.


Scent memories are among the most vivid, and are often associated with a person or place.  We’ve all smelled a particular brand of perfume and been instantly reminded of a person who used to wear it.  Or smelled a scent and been transported back to the chaparral or woods where we played as children.  Such scent memories are often vivid, specific and long-lasting (even into advanced old age).    And the most vivid scent memories seem to be those associated either with novel scents or with intensely positive or negative feelings coupled with a particular scent.  There’s a reason why the scent of pancakes brings us back to our grandmother’s kitchen!


So, the effect of specific scents on our moods may in part be due to their associations with ‘vivid’ people and events – good and bad – in the past.  And it’s very difficult to tease out the direct effects of scents on human physiology from the indirect effects on moods and emotions tied to scent memories.  In fact, this is an area of active research and current debate. [see ref. 5 & 6, below, for more]


But it really doesn’t matter how scents affect our moods.   In fact, one way or another, they do. The makers of perfumes and the aromatherapy industry have known this all along.  There’s a reason that scented plants have been used to enhance bodies and abodes, in most cultures, for as far back as we know.   Plant fragrances can be used to disguise body odors and other unpleasant smells.  But fragrance also plays a role in human moods, emotions and even social interactions.  The fact that science is beginning to back up these claims is just icing on the cake. 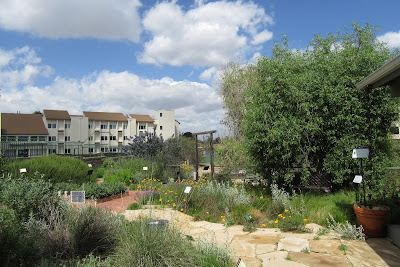 So how do we apply all this to our gardens?   First, we should remember that the most interest gardens are those that engage all of our five senses.  Most of us think a lot about color and form – the visual elements - when designing our gardens.   And gardens that sooth and heal should be pleasant to the eye.  But the sense of smell is at least as important.   So we should think about scent when choosing plants for our gardens.


Each person experiences a given scent uniquely.  This is due both to physiologic differences and differences in scent memories.  When choosing scent plants, choose ones that make you feel good.  Visit a native plant nursery and ‘try out’ the different fragrances of the native sages (Salvias).  Each cultivar and species is a bit different, so be sure to plant one you like.  Visit Mother Nature’s Backyard.  We have a number of scented plants, and encourage you to experience them fully.  For a list of fragrant native flowers see: https://www.slideshare.net/cvadheim/california-plants-with-fragrant-flowers.   For a list of scented native foliage plants: https://www.slideshare.net/cvadheim/califoria-plants-with-fragrant-foliage.

Place scented plants where you can best enjoy them: near a window, along a path or near an outdoor seating area.   Grow scented herbs in your kitchen garden, in pots on your porch or near the back door.

Take time to really enjoy the fragrances in your garden.  Remember to ‘stop and smell the roses’.    Leave your electronic devices inside, close your eyes, and truly experience the fragrance of a rose.  Crush the leaves of a mint, inhale its aroma and be aware of its effect on your breathing, heart rate and mood.   Do you feel relaxed?  Invigorated?  Does your mind feel clearer?


Share your scent garden with others.  Invite your friends to enjoy your garden.  The scents will enhance your interactions like nothing else.   Dry your scented flowers and foliage for use in cooking and potpourri. Be sure to share some of your scented wealth.  For more ideas see: http://mother-natures-backyard.blogspot.com/2016/04/california-gourmet-making-flavored.html and http://mother-natures-backyard.blogspot.com/2013/11/garden-crafts-making-potpourri-from.html. 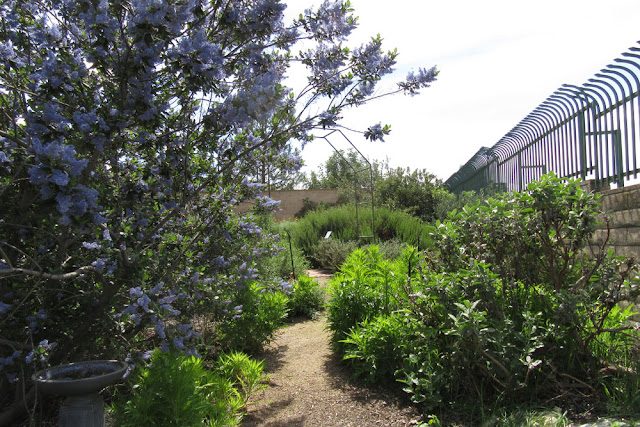 These are challenging times!  It’s no wonder we’re feeling a little stressed!   In fact, we’re in serious need of stress relievers – and the scents of our gardens can play an important role.   So resolve to add some scented plants to your garden this year. You’ll be amazed at the results!


For more posts in this series see : http://mother-natures-backyard.blogspot.com/2018/01/gardening-for-health-1-go-hug-tree-for.html


For several talks on the use of native scented plants, see:

Posted by Mother Natures Backyard at 9:48 AM