What an unusual year!   Hot and dry – rains in summer; it’s no wonder plants are blooming at unexpected times.  Among the species that keep on flowering are the fall-blooming sunflowers. For example, the Big gumplant (Grindelia camporum) in Mother Nature’s Garden of Health has bloomed off and on from June to now.


There is even debate about whether Grindelia camporum deserves its own taxon. Some advocate lumping it with several other California gumplants into the broader Grindelia hirsutula  Hook. & Arn.   The Integrated Taxonomic Information System (ITIS) lumps; the USDA Plants Database, Jepson Manual and Calflora still accord it species status.  For this posting, we’ll side with the splitters.  We’ve grown both Grindelia camporum and G. hirsutula in the garden.  And while they have their similarities, the two (at least those available in the local horticultural trade) look and behave somewhat differently in the garden.


Big gum plant grows most often in seasonally moist areas: along roadsides, in arroyos and washes, along seasonal streams/wetlands and other places that get a little extra winter water.  It’s a member of several lower elevation plant communities, including the chaparral and coastal sage scrub, occurring at elevations from near sea level to about 4000 feet (1200 m.).  The local soils are primarily alluvial – either sandy or clay – and may be saline and alkaline along the coast.


Grindelia camporum is a drought-deciduous, herbaceous perennial or part-woody sub-shrub.  It quickly grows to 2-4 feet (about 1 m.) tall and about as wide. It spreads via both rhizomes and seed, and will fill in bare patches in the garden.   It has stout, erect stems that become woody at the base with age.


The entire plant has a robust appearance; if you need a more delicate appearing gumplant, try Grindelia hirsutula.  Young stems are quite erect, but they tend to lean as the season progresses.  The stems are thick – almost succulent – and are smooth and somewhat sticky with resinous secretions.


The leaves are medium green, alternate and clasp the stem.  They are thick, leathery and quite sticky. Foliage and flowers all have a strong, distinctive, resin-like aroma.  You’ll get to know this fragrance well as you handle the plants.  We like the scent, but some probably don’t; smell the plant before purchasing it.   The basal leaves are largest (to 6 or 7 inches), oblong and usually sharply toothed.  Leaves become smaller – and more elongated – further up the stem.


Many gardeners love Big gumplant because of the flowers.  A member of the Sunflower family, Grindelia camporum produces flowers in typical ‘sunflower heads’.  The flower heads are of medium size (one to 1 ½ inches across), with about 25 bright yellow ray flowers (the ‘petals’) and numerous yellow disk flowers in the center.  The flowers are decorative as only sunflowers can be.
Several floral characteristics differentiate the Grindelias from other sunflowers.  First, they produce a gummy white substance that likely protects immature flowers from disease/predation. You can see the gum in the picture above; it disappears as the flowers mature.   This ‘gum’ was reportedly chewed by children as a gum substitute in previous eras.  We’ve tried it and concluded it was probably chewed for pleasure only by pretty desperate kids!  It was chewed as a medicinal gum (more on that below).

The second unusual feature of Gumplant flowers are the green bracts surrounding the flower head – the phyllaries.  These are particularly showy in the Gumplants, and can sometimes be used to distinguish between gumplant species.  The phyllaries of Big gumplant are flattened at the base, but cylindrical and hooked at the tip (see photo above).  The phyllaries bend out in this species, forming a distinctive ‘cup’ below the flower head.


Big gumplant begins blooming in late spring (May) and can continue well into the fall (October or even November this year).  In drier local gardens – and in the wild – this species often loses its leaves and even dies back entirely in summer.  If rains occur in summer or early fall, the plants may green up and bloom again in fall.  That’s what they did in our garden this year.


The gumplants, like sunflowers in general, are insect pollinated.  They attract a wide range of pollinating insects including native bees, European honeybees, pollinator flies/wasps and butterflies.   In general, gumplants are good all-round insect plants; many gardeners use them for just that reason.   The seeds are small and distributed by wind – if not eaten by hungry birds.  The plants may move around the garden via new seedlings planted by Mother Nature.
﻿

In our gardens, Big gumplant looks good for 4-5 years, then either dies out or is ready to be replaced.  Fortunately, it is easy to propagate from seed.  Collect fresh, dry seed in summer; plant in recycled nursery containers in late fall, and you’ll have replacement plants by next spring.  Remember to just barely cover the seeds with potting soil – they need light to germinate.


You can also easily propagate from stem cuttings in summer.  Just stick 12 inch, semi-woody cuttings into one-gallon pots (we stick up to 6 per pot; insert about 6 inches deep). Keep the soil moist, then wait for the cuttings to leaf out and produce roots.  Not all will take, but at least several should do well.


Grindelia camporum is a facultative wetland plant in California; it usually grows at wetland margins or other seasonally moist areas.  So, this plant needs good winter/spring rains to establish and succeed.  If Mother Nature doesn’t provide, you’ll have to do the honors.  Once established, Big gumplant plant is quite drought tolerant.  If you don’t mind the summer die-back, water only occasionally (or not at all).  You can get by with watering it once or twice a month in very well-drained soils.  In clays, summer water appears to decrease the plant’s life-span.


Big gumplant tolerates a wide range of soil textures.  We’ve grown it at both extremes; the only difference is the need to limit summer water in the clays.  Plants even tolerate the salty, alkali soils sometimes found right along the coast.  They like full sun and will become leggy otherwise.

And they look better if cut back to about 12-15 inches when they go dormant.  Some cut them back in summer (they do look a little ratty); others wait to prune in fall.  Those in moister, colder climates (where gumplants are winter-dormant) may want to cut back in early spring.  That’s really all the management these plants need.
Big gumplant is routinely planted in habitat gardens in western Los Angeles County. It provides nectar/pollen for insects and seeds for the birds.   It looks great with other local water-wise natives including the bunch grasses, sub-shrubs (particularly the native Buckwheats and Salvias) and larger chaparral shrubs.  Just remember, this is a large, robust-appearing plant - place accordingly.  The cheerful yellow flowers and fresh scent make it a nice addition to many gardens.  The flowers contrast beautifully with the spring penstemons and fall asters.  Some gardeners even grow Big gumplant in their herb or medicinal garden.


The Grindelias, and Grindelia camporum in particular, have a long history of use as medicinal plants.  In fact the genus name honors David Hieronymous Grindel (1776-1836), a German pharmacologist, physician and professor of botany at Riga, Estonia.  Native Californians traditionally used Big gumplant both externally (as a poultice or infusion) and internally (as an infusion - or gum chewed as a remedy for sore throat).


A poultice made from fresh flowers and/or foliage or an infusion of the dried plant is applied to skin rashes, minor burns, eczema, dermatitis and other superficial skin conditions. This external use – along with appropriate antibiotic creams if needed – may provide relief by numbing the nerve ends. We’ll discuss how to make and use poultices later this month.


Big gumplant has also been used as an infusion (tea) and tincture to treat conditions associated with excess respiratory mucous: bronchitis, coughs and bronchial asthma.  It was used as a homeopathic medicine in the U.S. and Europe until the 1960’s, when the U.S. FDA required such products be formally tested for safety and efficacy.


While Grindelia tinctures can still be purchased on-line, the needed clinical trials have yet to be conducted.  Several smaller studies suggest that this medicinal should be used with caution, and should not be used at all by patients who are pregnant or breast-feeding, or have kidney disease, hypertension or heart conditions.  Those aged 55 and older need be particularly careful, since kidney function decreases with age, and many of the active chemicals are excreted in the urine.


Grindelia camporum produces a wide range of plant chemicals including grindelane diterpenoids, balsamic resin, volatile oils, other terpenoids, saponins and many others.  The exact modes of action for most of these chemicals are currently unknown.  However, Grindelia camporum extracts appear to slow heart rate, decrease mucous production, and decrease inflammation both by blocking nerve endings and possibly acting as an antibiotic.


Future research may support a role for this plant (or specific chemicals) in the treatment of asthma and other conditions.  But for now, if you choose to take this medicine internally, do so with proper caution.   Some combination of the chemicals is known to interact with common medications for hypertension (high blood pressure), with diuretics, and possibly with other medications.  You should never use this medicine without first consulting your doctor.   To read more about Big gumplant as a medicinal, see references 1-4, below.  For more on making tinctures see: http://mother-natures-backyard.blogspot.com/2015/10/garden-of-health-making-tincture-for.html


In addition to its medicinal properties, Grindelia camporum produces other potentially useful chemicals.  The resin (diterpene resin acids) produced by the foliage glands has qualities similar to wood rosin, a product with many manufacturing uses (adhesives, rubber, coatings, textile sizing, dyes and more).  The Grindelic resins are currently being evaluated as cost-effective wood rosin substitutes.  And if you are a natural dyer, the flowers and foliage produce lovely, color-fast yellow and green dyes. For more on natural dyes see: http://mother-natures-backyard.blogspot.com/2012/10/solar-dyeing-with-native-plant-trimmings.html


In summary, Big gumplant is a robust perennial sunflower with excellent habitat value.  It is easy to grow, requiring little care and not much water.  The flowers are lovely and attract a parade of interesting insects. The blooms are particularly attractive when contrasted with the purple flowers of the Salvias.  The plants have useful properties, including use as medicinals and dye plants.  We hope you’ll consider Big gumplant when you need a local sub-shrub.


For more pictures of this plant see: http://www.slideshare.net/cvadheim/grindelia-camporum-web-show 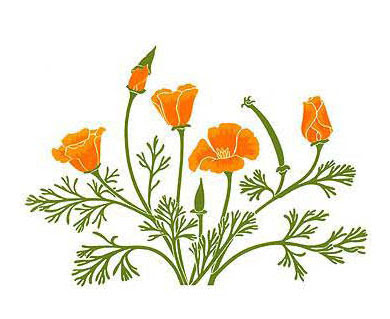 The Fall, 2015 CSUDH Native Plant Sale will be held Friday, November 13th and Saturday, November 14th.  The sale features locally native (and some other CA native) plants, including a large selection of plants for rain gardens, ponds and containers.  The plants are grown on campus, and donations support greenhouse and restoration activities in the South Bay.   Reasonable prices - easy parking.
To learn more, see: http://nativeplantscsudh.blogspot.com/2015/11/fall-native-plant-sale-2015.html
Posted by Mother Natures Backyard at 10:21 AM No comments: